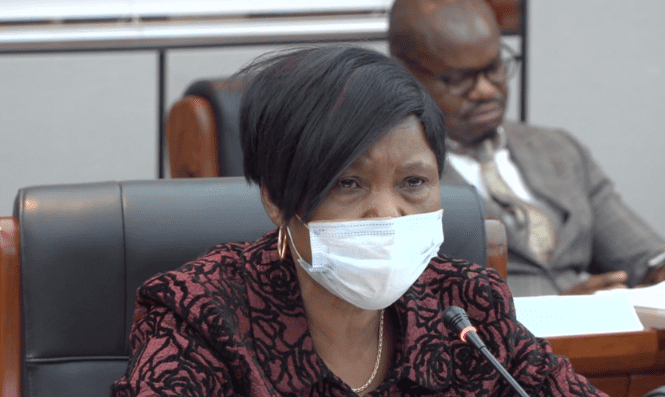 Public health experts in Zimbabwe are condemning remarks by the country’s Defence minister who accused China of botched “experiments” as responsible for the outbreak of the coronavirus pandemic ravaging the world.

President Emmerson Mnangagwa’s government has since distanced itself from the accusations made in a tearful interview as the Defence minister mourned a fellow minister lost to COVID-19 on Friday.

The minister also said she would only take a COVID-19 vaccine if it is developed in Zimbabwe.

Zhao Baogang, deputy Chinese ambassador to Zimbabwe, Sunday said the embassy would only comment on the accusations by Defence Minister Oppah Muchinguri in the coming week after reaching Beijing as it was a “sensitive issue.”

In an interview with an online publication, which has gone viral on social media, Muchinguri who is also head of Zimbabwe’s cabinet task force on COVID-19 – said the pandemic was now decimating the southern African nation.

“We have no vaccine here [yet]. I am not going to take other nations’ vaccine. Why should we not have ours? We are trying ours here (in Zimbabwe) with the Chinese. Maybe it will be successful,” she said.

But in the same tearful interview, Muchinguri blamed China for the virus which has infected nearly 27,000 Zimbabweans, including 683 deaths.

“Isn’t it that there is another serious upsurge of COVID-19 cases in China? It’s them who had botched experiments. Now that’s killing us. They can’t reverse it anymore. Look at where the people we call friends have taken us to,” she said.

On Sunday, Muchinguri refused to speak about her interview when reached for comment.

Calvin Fambirai is executive director for Zimbabwe Association of Doctors for Human Rights. He said his organization condemned the “reckless utterances” by Muchinguri, especially on the importance of a vaccine to contain the coronavirus.

“This bears testimony to the lack of capacity within government in handling the pandemic. Vaccines have been scientifically proven to work and have gone the rigorous clinical trials process. For a government minister to suggest otherwise, is irresponsible, and we hope the appointing authority will take disciplinary measures. The circumstances behind the origin of the coronavirus are still being investigated by WHO and we do not promote any xenophobic utterances on this matter. The focus must be on taming the spread of the virus, expanding health sector preparedness and planning for vaccine roll out,” he said.

In a move which analysts say is meant to avert a potential diplomatic fallout with China, Zimbabwe’s ministry of foreign affairs late Saturday, distanced Harare from Muchinguri’s remarks on the origins of the coronavirus disease.

Constance Chemwayi, foreign affairs spokeswoman, said Muchinguri’s sentiments did not reflect the position of the government of Zimbabwe.

She added: “Zimbabwe and China enjoy excellent relations. The government does not hold the Chinese government responsible for the emergence and spread of the coronavirus that has affected every global citizen. The government appreciates that China has exercised global leadership in efforts to find both the cause and a solution to the pandemic.”

Last year, Muchinguri was in the limelight after she took delight in the virus’ spread — then mainly in Western countries, such the U.S. — saying it was God’s punishment for imposing economic sanctions on the southern African nation.

‘I Am Responsible For Murang’a Women Starting To Get Pregnant Again,’ Natembeya Claims

Kamene Goro Explains Why She Will Never Be Friends With Mulamwah