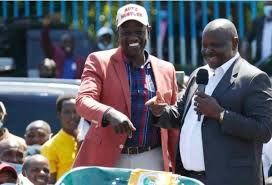 The friendship between Deputy President William Ruto and former Bomet Governor Isaac Rutto seems to have gained a new dimension following a handshake in Bomet County on Friday.

The CCM party leader attended a rally where DP Ruto was addressing members of the public shortly after a fundraiser.

While addressing the crowds shortly after their handshake, former Governor Rutto assured the DP Ruto that the people of Bomet would stand with him come 2022.

On his part, DP Ruto asked the people of Bomet County to reelect Mr Rutto as governor in the next General Election.about:blank

The friendly ties between DP Ruto and the former Governor begun to bloom in 2018 when the DP was attempting to bring peace between Rutto and the late Dr Joyce Laboso.