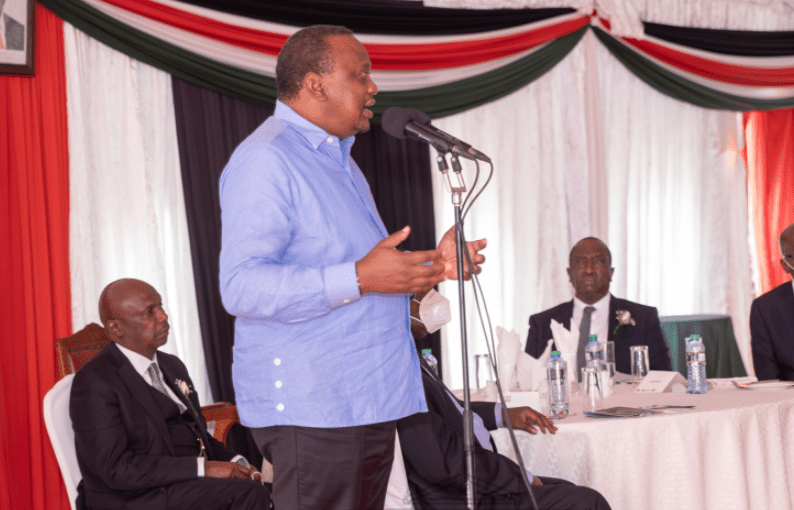 UHURU: Emulate the respect and patience of Mzee Moi

President Uhuru Kenyatta has urged fellow political leaders to exercise the kind of humility, patience and respect the late retired president Daniel arap Moi accorded everybody around him regardless of social standing.

President Kenyatta spoke in Kabarak where he joined family and friends at the remembrance service to mark one year since Mzee Moi passed on.

The Head of State remembered the late Mzee Moi as a man of “great strength of character and great patience”, traits he wished upon the leaders of today.

He expressed great concern for the future of the country saying the current crop of political leaders is filled with arrogance and impatience.

“Mzee Moi was a man who had great strength of character, great patience. Mzee Moi had that strength that comes from humility; he respected everybody. Alikuwa na marafiki katika viwango mbalimbali kwa maisha. He knew people at all levels of society. Moi was a father to this country, he was a father to many of us. And the one thing I would want to remind people today ni kwamba heshima si utumwa,” he said.

He further urged leaders to stop thirsting for political positions that are still occupied, telling them to respect their masters and wait for their own turns.

“Wenzangu, uongozi mtapata, hamna shida, lakini tafadhali tafuteni heshima na wenzenu, tuishi kwa heshima. The arrogance that we see in today’s leadership raises many questions as to the future of this country,” he stated.

President Kenyatta also remembered the late Moi as a father-figure to the nation and to him personally, not only politically but also in life in general.

He credited Moi with moulding him as a child, all the way from his schooling days right until his journey into State House, adding that he would not be occupying the country’s top job today were it not for Moi.

Burna Boy Shows Support For Harmonize Amidst Fight With Diamond