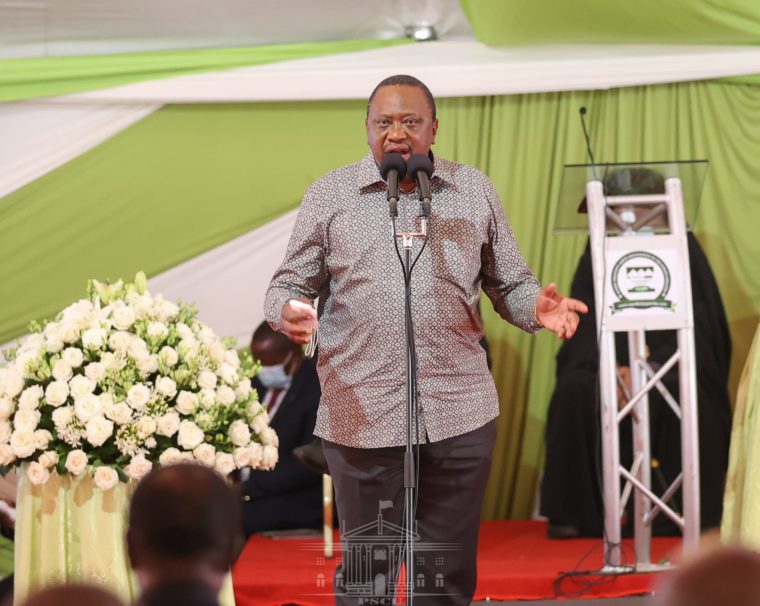 President Uhuru Kenyatta waded into the 2022 succession debate arguing it could be the time for another community to lead the country after a period of long dominance by the Kikuyu and the Kalenjin communities.

Speaking in Vihiga county during the funeral of Amani National Congress (ANC) leader Musalia Mudavadi’s mother, Mama Hannah, in Mululu, Vihiga county on Saturday, Uhuru said since some Kenyans have been saying that they are tired of Uhuru’s family leadership, it is time for other tribes to rule other than Kikuyu and Kalenjins.

“I heard some leaders talking somewhere in Msambweni that they are tired of certain families…some of the seats they hold currently are because of my votes. Let’s respect each other because a country where people do not respect each other cannot stand.

“If there’s any truth from those who spoke and that you are tired of certain families and now you are saying it’s time for others…then if that is your logic, I can also stand here and say…there are only two communities that have ruled Kenya since independence…maybe it’s time for another community to lead…isn’t that so?” Uhuru posed amid cheers by mourners.

The Head of State at the same time dismissed claims by some leaders who spoke at the burial service that he had become a lame-duck president with no “claws” insisting he was firmly in charge of the country.

Simon Warunge leads detectives to where murder weapons were disposed

I Turned Down Netflix’ Offer To Feature On ‘Young, Famous And African’ – Anerlisa Muigai Reveals

Gideon Moi is the favourite presidential candidate of Uhuru others are flowers girls: Herman Manyora says.

Governor Okoth Obado declares his interest in running for presidency in 2022.