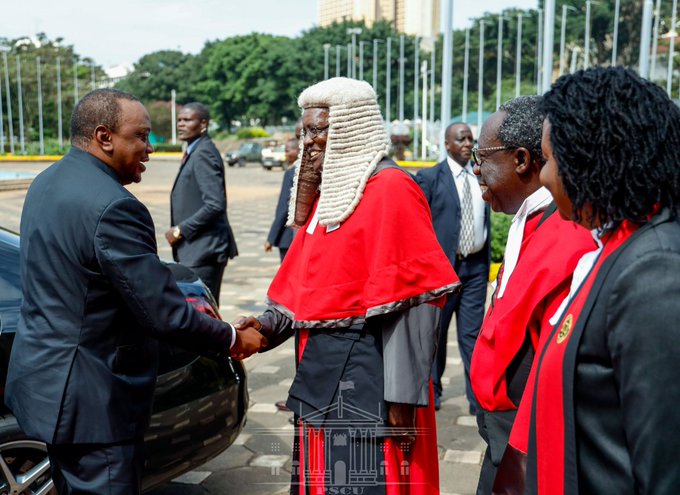 It seems that what appeared to be a casual threat by President Uhuru Kenyatta after the nullification of the 2017 presidential election is coming to pass.

It is playing out with finesse and impunity if recent happenings in the Judiciary are anything to go by.

At the time of nullification, the President warned “we shall revisit” [this ‘problem’ with the Judiciary]. He called the justices wakora, crooks.

Now the Judiciary has literally been reduced to a state-controlled puppet with neither the capacity to bark nor bite. Nothing illustrates this better than events after the March, 9, 2018, handshake.

First, the powers that be seem to clearly know where and how to cripple the Judiciary. The constitutional and human rights division of the High Court, for instance, has been reduced to a state puppet.

An analysis of petitions filed in that division against the Building Bridges Initiative and the Nairobi county assembly reveals a judiciary acting without precedent or in competition with its own decisions.

Although the division certified all matters as urgent, and all judges acknowledged in most of the cases that the petitioners raised weighty constitutional issues, these matters have not been heard in good time.

None of them has been able to secure any orders against the state or BBI process.

A perusal of court document this writer has obtained speaks volumes about how the Judiciary seems to have been cowed into silence, and into a scheme of unacceptable connivance with the state.

Let us start with the most recent, the petitions filed against Anne Kananu, who has since been sworn in as Nairobi Deputy Governor. There are a total of 11 cases either petitioning her vetting or the swearing-in.

However, except for the LSK petition, which is similar in many aspects to the suits filed against the same matter, those filed earlier did not convince the presiding judge — who handled all the matters — to issue any conservatory orders.

The strange management of this case is tellingly worrying. The judge on January 18, 2021, issued orders consolidating all the cases and referred them to the acting Chief Justice for empanelment.

However, the following day, a cross petition was filed by Kananu — the subject of all the petitions — and the same judge acted in a way that should make everyone interested in the rule of law very worried.

Rather than refer the file, which was challenging the orders he had issued the previous day to acting Chief Justice Philomena Mwilu, he went ahead and issued new orders. He even recalled the consolidated files, and gave fresh directions that prioritised the hearing of Kananu’s cross petition. This cannot be a coincidence.

While I’m not a lawyer, or even a legal scholar, common sense and practice dictate that when a judge refers a file to the Chief Justice, s/he loses jurisdiction over the matter and cannot therefore act on the same files unless appointed in the subsequent panel.

In this instance, the judge seems to have usurped the role of the acting Chief Justice, as there is neither logic nor legal provision to support his action. In fact, by recalling the consolidated files, the judge literally appointed himself an appellate judge and reviewed his own orders.

Is the judge acting on instructions from cartels that do not want an election in Nairobi City County? The same judge has in the meantime, in a ruling dated January 14 2021, suspended the Gazette notice on the Nairobi by-election.

The delays occasioned the failure to adjudicate on these petitions seem to be a calculated move by certain powers to ensure the constitutional timelines for the by-election will have lapsed, sadly aided by a court ruling by Justice James Makau in Petition No. E 012 of 2021.

The petition erroneously suggested that the 60-day countdown for the by-election starts from the date the courts will rule on the various petitions. However, this is against precedent set by the Supreme Court in the Martha Karua vs IEBC, Anne Waiguru & others. The highest court held there is no legal remedy when constitutional timelines expire.

These judicial inconsistencies spell doom for justice and the rule of law as public interest cases are not heard and determined within the shortest time possible.

Another example is a case by the Thirdway Alliance filed in December 2018. The case challenging constitutionality of the Building Bridges Initiative went through the hands of four judges and was only heard one year later by a fourth judge.

Several other cases filed by Okiya Omtatah and others that were consolidated and put before a five-bench judge continue gathering dust and moss in the corridors of justice, whilst a case filed in Mombasa by MUHURI has not made any progress. We can only guess the reasons why.

There is a high likelihood that these cases may be rendered nugatory as it seems the objective is to delay them as much as is practically possible to enable the BBI proponents to proceed with the process unchallenged.

The fact that judge after judge has referred these matters to the Chief Justice for empanelment is evidence enough that they raise serious questions of law. Why then are the courts afraid to issue any of the conservatory orders sought?

Lastly, it is important to note that the files the courts seems to delay or ping pong in making decisions are those questioning decisions made by or supported by the Executive/’deep state’.

Contrastingly, courts have moved very fast to issue interim orders (even before hearing the parties) on matters on issues favourable to the state. The best example of this is stopping Uhuru from dissolving Parliament after the [now-retired Chief Justice David] Maraga’s petition.

The High Court issued quick orders in three separate cases barring the President from dissolving Parliament. It is hard not to think that the enthusiasm and the speed at which the court issued these ex parte orders was not influenced by the court wanting to be in a safe place with the President and Parliament.

Why A Wife Should Earn Her Own Money Too

Auditor General off the hook over Kemsa probe typos