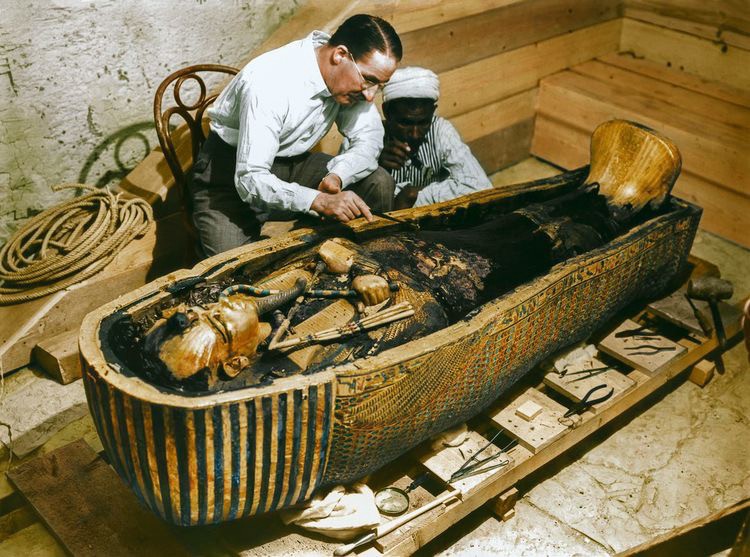 The final wall of the sealed burial chamber of the 18-year-old Boy King Tutankhamun of Egypt was breached for the first time in 3,000 years on February 17, 1923.

Archaeologist Howard Carter whispered breathlessly that he could see `things, wonderful things’ as he gazed in awe at the treasures of Tutankhamun. As Carter, together with fanatical Egyptologist Lord Carnarvon, looked at the treasures of gold, gems, precious stones, and other priceless relics, they ignored the dire warning written all those centuries ago to ward off grave robbers.

“Death will come to those who disturb the sleep of the pharaohs.”

But for Carter and Lord Carnarvon, who had financed the dig culminating in history’s greatest archaeological find, all thoughts of curses and hocus-pocus were forgotten as they revelled in the joy of the victorious end to the dig.

On April 5, 1923, just 47 days after breaching the chamber into Tutankhamun’s resting place, Carnarvon died in agony – the victim, apparently, of an infected mosquito bite.

At the moment of his death in the Continental Hotel, Cairo, the lights in the city went out at the same time and stayed off for some minutes. Thousands of miles away in England, at Lord Carnarvon’s country house, his dog began baying and howling, an unnatural lament which shocked the domestic staff deep in the middle of the night, until the tormented creature turned over and died.

Two days after Carnarvon’s death, the mummified body of the pharaoh was examined and a blemish was found on his left cheek exactly in the position of the mosquito bite on Carnarvon’s face.

Perhaps this could have been passed off as coincidence had it not been for the bizarre chain of deaths that were to follow.

Shortly after Carnarvon’s demise, another archaeologist, Arthur Mace, a leading member of the expedition, went into a coma at the Hotel Continental after complaining of tiredness. He died soon afterward, leaving the expedition medic and local doctors baffled.

A close friend of Carnarvon, George Gould, made the voyage to Egypt when he learned of his fate. Before leaving the port to travel to Cairo he looked in at the tomb. The following day he collapsed with a high fever; twelve hours later he was dead.

Radiologist Archibald Reid, a man who used the latest X-ray techniques to determine the age and possible cause of death of Tutankhamun, was sent back to England after complaining of exhaustion. He died soon after landing.

Carnarvon’s personal secretary, Richard Bethell, was found dead in bed from heart failure four months after the discovery of the tomb.

The casualties continued to mount. Joel Wool, a leading British industrialist of the time, visited the site and was dead a few months later from a fever which doctors could not comprehend.

Six years after the discovery,12 of those present when the tomb was opened, were dead.

Within a further seven years, only two of the original team of excavators were still alive. Lord Carnarvon’s half-brother apparently took his own life while temporarily insane, and a further 21 people connected in some way with the dig, were also dead.

While countless Egyptologists and academics have tried to debunk the legend of the curse as pure myth, others have continued to fall victim to its influence…

Mohammed Ibrahim, Egypt’s director of antiquities, in 1966 argued with the government against letting the treasures from the tomb leave Egypt for an exhibition in Paris. He pleaded with the authorities to allow the relics to stay in Cairo because he had suffered terrible nightmares of what would happen to him if they left the country. Ibrahim left a final meeting with the government officials, stepped out into what looked like a clear road on a bright sunny day, was hit by a car, and died instantly.

Perhaps even more bizarre was the case of Richard Adamson who by 1969 was the sole surviving member of the 1923 expedition. Adamson had lost his wife within 24 hours of speaking out against the curse. His son broke his back in an aircraft crash when he spoke out again.

Still skeptical, Adamson, who had worked as a security guard for Lord Carnarvon, defied the curse and gave an interview on British television, in which he still said that he did not believe in the curse. Later that evening, as he left the television studios, he was thrown from his taxi when it crashed, a swerving lorry missed his head by inches, and he was put in the hospital with fractures and bruises. It was only then that the stoic Mr. Adamson was forced to admit: “Until now I refused to believe that my family’s misfortunes had anything to do with the curse. But now I am not so sure.”

Perhaps the most amazing manifestation of the curse came in 1972 when the treasures of the tomb were transported to London for a prestigious exhibition at the British Museum.

Victim number one was Dr. Gamal Mehrez, Ibrahim’s successor in Cairo as the director of antiquities. He scoffed at the legend, saying that his whole life had been spent in Egyptology and that all the deaths and misfortune through the decades had been the result of `pure coincidence’. He died the night after supervising the packaging of the relics for transport to England by a Royal Air Force plane.

The crew members of that aircraft suffered death, injury, misfortune, and disaster in the years that followed their cursed flight. Flight Lieutenant Rick Laurie died in 1976 from a heart attack. His wife declared: “It’s the curse of Tutankhamun – the curse has killed him.”

Ken Parkinson, a flight engineer suffered a heart attack each year at the same time as the flight aboard the Britannia aircraft which brought the treasures to England until a final fatal one in 1978.

Before their mission to Egypt, neither of the servicemen had suffered any heart trouble and had been pronounced fit by military doctors. During the flight, Chief Technical Officer Ian Lansdown kicked the crate that contained the death mask of the boy king, “I’ve just kicked the most expensive thing in the world,” he quipped.

Later, on disembarking from the aircraft on another mission, a ladder mysteriously broke beneath him and the leg he had kicked the crate with was badly broken. It was in plaster for nearly six months.

Flight Lieutenant Jim Webb, who was aboard the aircraft, lost everything he owned after a fire devastated his home. A steward, Brian Rounsfall, confessed to playing cards on the sarcophagus of Tutankhamun on the flight home and suffered two heart attacks.

Source: William W. Lace (2008). The Curse of King Tut, the Mysterious and Unknown.

The reality of dating in campus.

Quarantined by the Headmaster.