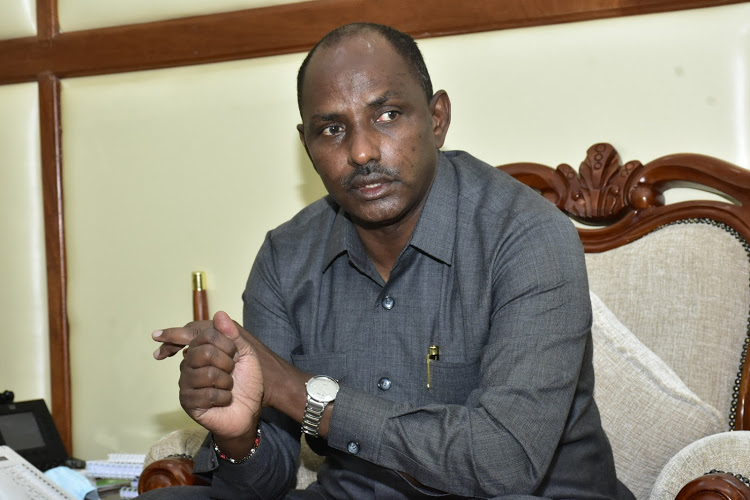 The National Treasury has embarked on a fresh bid to raise the debt ceiling from the current Sh9 trillion that was set by Parliament in October 2019.

Treasury CS Ukur Yatani said the statutory debt limit has to be expanded to cater to the budget deficit in the financial year 2021-22 and the preceding years.

In the 2021 Medium Term Debt Management Strategy before Parliament, Treasury says the country’s debt remains sustainable but risks to sustainability have increased.

The ministry said debt indicators are expected to improve with efforts towards fiscal consolidation and the global economy recovering from the Covid-19 shocks.

“Implementation of this debt management strategy may require the revision of the debt ceiling, based on future borrowing requirements,” Yatani told MPs.

The country is technically broke, with the virus taking a hit on revenue streams that are yet to rebound amid global travel restrictions and curfews.

Debt service—principal and interest payments—will cross the Sh1 trillion mark in the next financial year.

Kenya’s debt stock was Sh7.12 trillion as of September 2020—accounting for 79 per cent of the Sh9 trillion ceiling.

The amount has grown on account of pressure to fund infrastructure and debt servicing at the height of dwindling revenue generation.

The Parliamentary Budget Office said the trend is projected to continue over the medium term owing to planned projects and Covid-19 response stimulus packages.

The budget experts warned that even though the stock of debt stock is considered sustainable, other sustainability indicators show otherwise.

“Following the impact of the Covid-19, the outlook forecast is expected to worsen with a possibility of breaching all the thresholds in the medium term,” PBO said.

Debt is projected to reach Sh7.8 billion this financial year, with the budget deficit projected to be over Sh1 trillion.

Although the Treasury is yet to declare the official cap it intends to present to MPs, word is that it could be Sh12 trillion.

The ministry, in its call to MPs, said inflation, fluctuating exchange rates, and high-interest rates pose risk to revenues and expenditures.

Following the impact of the COVID-19, the outlook forecast is expected to worsen with a possibility of breaching all the thresholds in the medium term

The alarm is that more than half of the total debt is held in foreign currencies, presenting an imminent fiscal risk should the shilling depreciate.

Yatani, however, assured MPs that the national government’s borrowings will be used only for the purposes of financing development projects.

He also pledged to seal revenue leakages, improve compliance, and up collections by leveraging on ICT and innovations.

Treasury expressed optimism that favourable changes in the global front will positively impact the domestic economy – to grow at 3.8 per cent against the world’s 5.5 per cent.

It further says that Kenya is a strong performer as per composite indicators by the World Bank and the IMF.

However, the PBO has warned that the debt stock is projected to double by June 2030 and could account for over 100 per cent of GDP.

“To manage this situation, lengthening the maturity of existing securities may be necessary even though this will transfer debt to future generations,” the experts said.

It cited guaranteed debt as a significant risk to the country’s debt position—the same having increased by 276 per cent to Sh165 billion in June 2020.

Among them is the Sh79.9 billion in debt guarantee to Kenya Airways; Sh80.6 billion to KenGen and Kenya Airports Authority.

“Given its stock level, strict adherence to legal provisions will be key in minimising this contingent liability risk and maximising the economic impact of debt guarantees,” PBO said.

It also warned that the role of the debt ceiling in debt management is weak since the cap is not considered a sustainability indicator but a legal limit.

“It is a numerical limit, arbitrarily set, and delinked from macroeconomic factors that determine the debt carrying capacity of a country, alongside other factors.”

PBO further argued that it limits the regulatory role of the public debt management office given that there is a single ‘fixed’ regulatory parameter.

“The choice of ceiling will promote transparency and use of better sustainability measures,” PBO said.

Treasury plans to reduce fiscal deficit and public debt vulnerabilities to shift the debt distress from high to medium by June 2024.

President and his deputy who sat next to each other avoided direct eye contact at Nyachaes funeral.

Mombasa Sex Workers Over The Moon After Uhuru Lifted Curfew

Davido’s Adds Ksh.13M To Ksh.54M He Received From Funs As Birthday Gift, Donates All Of It To Orphanages