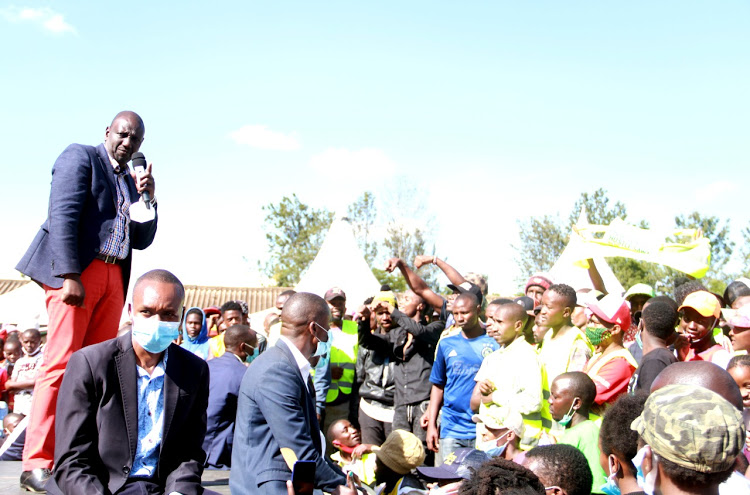 Deputy President William Ruto has now turned the heat on ODM leader Raila Odinga, telling him to face President Uhuru Kenyatta if he has problems with Jubilee government’s performance.

Ruto told the former Prime Minister to stop embarrassing and despising the Head of State with his constant attacks on the government performance in political gatherings.

“If you have a problem with the performance of Jubilee government, I want to tell you to stop despising and humiliating President Uhuru. Stop talking to him in rallies,” he said.

The DP asked Raila to telephone or pay a visit to the President, whom he been calling his brother, and tell him about the government’s failure instead of humiliating him in public.

He spoke at Kenya Assemblies of God in Dagoretti South where he attended a church service on Sunday.

“You are saying Uhuru is your brother, why are you embarrassing him in public saying the government has not done this or that?” he said.

The ODM leader has been attacking Ruto for attempting to run away from the failures of Jubilee administration.

In particular, Raila has asked him to take responsibly for Jubilee’s failure to deliver laptops for learners, build stadia among other promises the administration promised the electorate.

Raila’s attack came after Ruto and his allies appear to run away from Jubilee failures by accusing him (Raila) of infiltrating the government and preoccupying it with handshake and the BBI thus derailing its development agenda.

“The government of Uhuru and Ruto has built a railway line from Mombasa to Naivasha, almost 700km. We have built roads 7500km, connected electrify to five million Kenyans, and built technical training institutes,” he said.

The DP criticised Raila for engaging in petty politics, adding that he had played a central role in derailing Jubilee’s development programmes through the handshake.

“He changed our priorities from jobs creation to the review of the Constitution. He should accept he has been part of the failure,” he reckoned.

Ruto reiterated that the hustler movement was unstoppable despite criticism that the narrative was fanning a class war that could be detrimental to the country.

He argued that the narrative is about empowering ordinary Kenyans who struggle to put food on the table for their families, and instead attacked those criticising it as practising politics of tribalism.

“Let nobody threaten you that hustler is about dividing people. I want to tell you that these people we have outclassed them. They are the ones dividing the people by fanning politics of tribe and positions,” he said.

They scathingly attacked Raila, accusing him of derailing the government’s development agenda and that he should take responsibility for Jubilee’s failures.

Gachagua challenged Raila to be bold enough and face President Kenyatta instead of the roadside attacks.

“You said you are also a President because you were sworn in. So, what stops you from posing serious questions on the said government failures to the President Kenyatta?” he asked.

“Odinga should stop abusing the President. Instead, he should share his three-year scorecard with Kenyans when he was in the government,” Murkomen said.

Xavi Back At Barcelona, Named Head Coach Until 2024

James Orengo the “Political Prophet.” Will he manage?