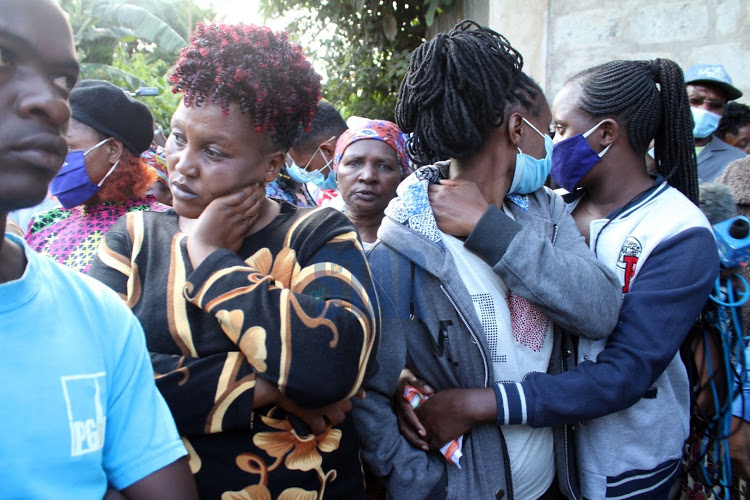 A son to a couple which was killed in cold blood together with three others in Karura area, Kiambu county was on Friday arrested as a suspect into the incident.

Police said they arrested the son identified as Lawrence Waruinge after he went missing since Tuesday when his parents, two brothers and a worker were brutally murdered at their home.

Lawrence, a university student in the city, was initially thought to have gone to school but it was established he was not there.

His mobile phone signal was traced to Naivasha and it is not clear how and why.

It was later traced to Thika and later to Kabete area.

Police said the suspect went to a relative’s home in Ngongoro area to seek refuge there before they were alerted Friday night.

And when he was arrested, he told police his parents were “satanic and cruel” to him.

He had in December 2020 gone to a chief’s office in their home and claimed his parents wanted to bewitch him.

According to police, his mother who is also dead came and picked him saying he had mental issues.

“The matter was never recorded because the mother came for him saying he was unwell,” said an officer aware of the probe.

It is believed at least five people were involved in the murder of Nicholas Njoroge Waruinge, his wife Annie, sons Christian and Maxwell and a construction worker James Kinyanjui.

Their badly mutilated bodies were found in their Kiambaa home on Tuesday and Wednesday.

It is believed a dispute over property was the motive of the murder.

According to the investigators, the absence of any form of forced entry or exit in the razor wire that surrounds the compound shows the killers were well known to the family.

It is believed that they made their way into the house through the rear door, where they found Annie, the wife of slain businessman and USA based nurse Waruinge, and hacked her to death before slitting her throat.

The commotion in the kitchen drew the attention of the second victim, Maxwell Njenga, Waruinge’s 13-year-old nephew, who was confronted along the corridor and cut in the head and throat.

Christian Njenga who detectives say was killed and his throat slit on his bed had just turned 13 on December 26, 2020.

Police believe Waruinge was in the master bedroom upstairs at the time of the attack.

He rushed to the balcony on sensing danger and jumped down where the killers caught up with him and stabbed him several times and left him for the dead.

He has 34 stab wounds and a slit throat.

The bodies were moved to the mortuary where a post-mortem is expected Monday.

Nothing was stolen from the compound during the incident.

Kiambu police boss Ali Nuno said they will also revisit past unsolved murder incidents that happened in the family and are probably related to the latest murder.

“The killers seem to have been on an elimination mission. Some of the victims may have been subdued to a level they could not raise alarm for help,” said Nuno.

Tuesday’s incident was the fifth in the family according to Nuno.

He said the first victim was killed in 2016 when one Allan Waruinge, a brother to Njoroge was a victim twice.

He was shot for the first time and confined on a wheelchair before his assailants pursued him later.

“There has been an incident which involved Alan Njire Waruinge in 2016 who was a victim after being shot twice after being confined on a wheelchair. And there was Kenneth Mungai Waruinge who was assassinated alongside with his niece thereafter.”

He said these incidents point to something wrong in the family or an interested party.

The first victim to be found dead at the scene was Kinyanjui, who had been brought to the site for construction by Njoroge’s brother-in-law to construct a house.

Waruinge had arrived in Kenya from the USA where he worked as a nurse for Christmas holidays about 11 days ago.

His two elder daughters survived the cold blood murder because they had the previous day gone to school. Neighbours said they are in secondary school.

Annie who worked with Kiambu County Government as a psychologist nurse and two of their children were found murdered and the bodies lying in the compound.

Woman Loses Her 5 Children On Her Birthday.