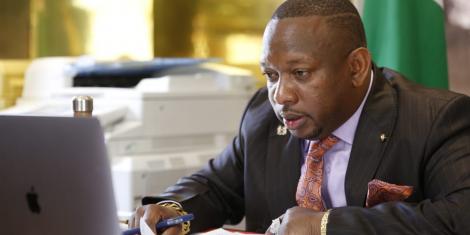 The fate of beleaguered Nairobi governor Mike Mbuvi Sonko is now in the hands of the Senate plenary.

The decision was arrived at during a special senate sitting that was convened Wednesday afternoon to decide the method of hearing impeachment charges against the county boss.

But in a twist of events, the members were not given an opportunity to vote after majority leader and West Pokot Senator Samuel Poghisio failed to move the motion seeking to form an 11-member special committee to probe allegations leading to the impeachment of Sonko.

Speaker Kenneth Lusaka is set to gazette 17th and 18th of December as the days to investigate the matter.

The Speaker in his communication notified the members that the Majority Leader, Samuel Poghisio in whose name was the notice of motion at order number 3 in today’s Order Paper, had failed to give notice of the motion.

“Where no Senator moves a Motion at the time specified by or under these Standing Orders, such motion shall not be published again in the Order Paper during the same session except with the leave of the Speaker” he added.

Standing order 75 (1) (b) provides only two options on proposed removal from office, by impeachment, of a Governor.

The Senate business committee had agreed on the two days if members go the plenary way.

“At a meeting of the Senate Business Committee held yesterday, it resolved to set provisional dates as December 17 and 18, should the House resolve that the matter be investigated in Plenary. I shall therefore proceed to Gazette special sittings for the two days” he told the members.

If any of the charges against the governor are upheld, he will stand impeached.

This was the first time the members held a hybrid virtual sitting where they were to vote electronically if the notice of motion had not been withdrawn.

Lusaka had gone ahead to communicate to the house rules guiding the online voting.

However, the majority of the senators contested the online vote saying the technology could comprise the integrity of the vote in the event the system failed.

Senators Ledama Ole Kina, Kipchumba Murkomen, Moses Wetangula and Mithika Linturi had called for a mock trial to establish whether the system was effective and verifiable.

Sonko was controversially impeached on Thursday last week with 88 MCAs said to have voted in support of a motion tabled by Michael Ogada.

However, 59 MCAs allied to Sonko, and who were with him in Kwale during the Thursday afternoon session claimed the assembly staff illegally cast votes on their behalf.

The censure motion was moved by Nairobi County Assembly Minority Leader Michael Ogada citing among others abuse of office, gross misconduct, and lack of physical and mental capacity to run county affairs as well as refusal to sign for funds allocated to Nairobi Metropolitan Services.

Nairobi: Johnson Sakaja Is Eyeing The City’s Top Sit  In 2022

Ringtone To Allegedly Undergo Surgery After Assault By Robert Alai