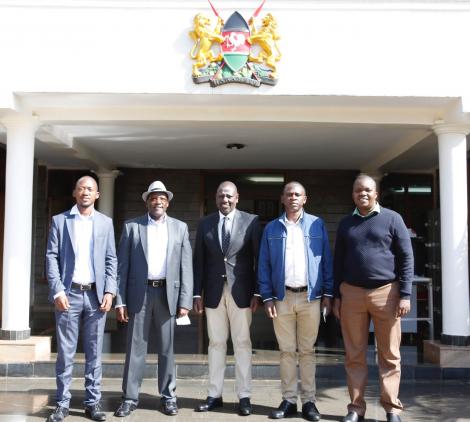 RUTO meets ‘Wheelbarrow’ Party team ahead of the by-elections

It is now clear Deputy President William Ruto is the owner of the newly formed political party by the name of United Democratic Alliance (UDA), whose symbol is a wheelbarrow.

Ruto plans to transform UDA into a formidable political tool.

The DP met with the wheelbarrow team to discuss the looming by-elections, among them the Machakos senatorial race.

This was confirmed by the UDA incoming Chairman, Johnstone Muthama, who stated that Ruto met 12 candidates who expressed interest in vying in the Machakos Senate by-election on a UDA ticket.

Muthama intimated that they agreed to conduct a survey to determine the best candidate to support for the upcoming poll.

“Our breakfast meeting primarily focused on the upcoming by-election.”

“We have agreed as it has been the hustler nation tradition, a scientific opinion poll shall be carried out and the aspirants have collectively agreed to respect and support the will of the people,” the former senator announced.

Muthama has in the recent past positioned himself to strategically influence politics in Machakos as he delivers wins for ‘Hustler Nation’ as exhibited in his role in Feisal Bader’s win in Msambweni on December 15, 2020.

A bus full of pupils overturns on a busy highway

DP Ruto Promises To Bring Miguna Miguna Back Into The Country

Retreating To Give Waiguru Time To Shine In UDA, Ngirichi Says