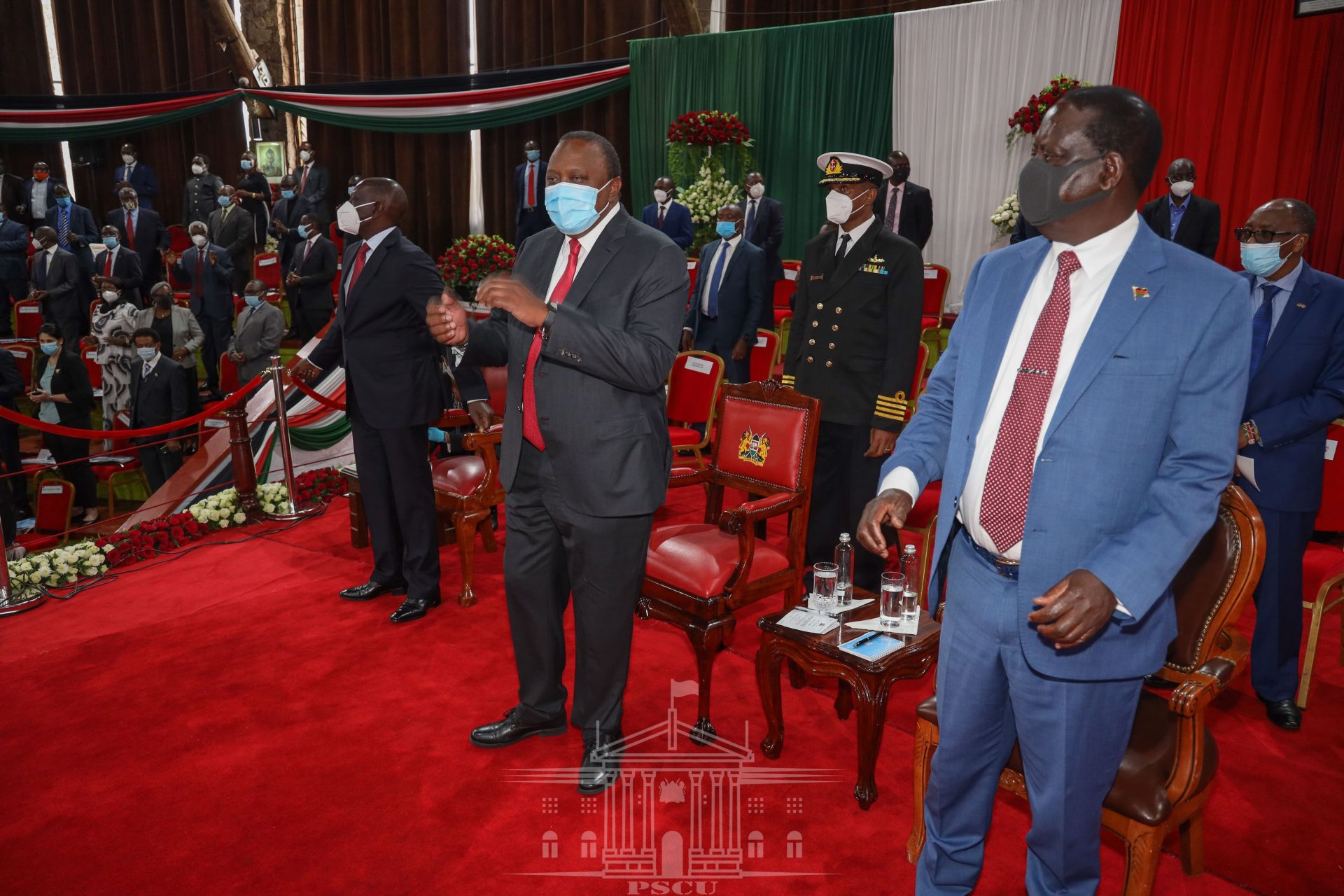 President Uhuru Kenyatta Monday dashed hopes for a review of the BBI report by unveiling a referendum roadmap and locking out his deputy William Ruto’s input.

Uhuru met about 300 pro-Building Bridges Initiative MPs and described Ruto as “traitor”. He also unveiled a packed timeline that will culminate in a referendum by June 2021.

Uhuru and his handshake partner Raila Odinga are expected to name a referendum coordinating team to spearhead the push to amend the Constitution.

The team’s first job would be to collect one million signatures by December 2.

Uhuru’s move to seal the BBI document appears to set the stage for a showdown with the DP and politicians critical of the report billed as the magic portion to the country’s ills.

On Monday, Uhuru told the lawmakers backing the report at a meeting in Naivasha that the BBI train must set off without delay.

Uhuru said Ruto and his team are dishonest in their campaign against the BBI report, insisting that they were part and parcel of the process from inception.

Missing during the two-day retreat were Ruto and his troops who have mounted a spirited campaign to have the report opened for a revision of contentious issues.

As Uhuru and Raila met their allies in Naivasha, the DP hosted more than 1,000 Akamba professionals from Makueni, Kitui and Machakos counties at his Karen residence.

The DP sustained his demands for a consensus, saying it is possible for the country to strike a deal on the BBI report.

“We can agree on the contentious issues on BBI so that we can move the country forward,” Ruto said.

He said a mechanism to bring together all divergent views on the initiative would spare the country from being plunged into an unnecessary contest.

But Uhuru accused the DP of pulling in the opposite direction.

“He (the President) wondered [about] his deputy’s dishonesty. He was very clear that his deputy was well briefed. He actually said in Kenya we have a very short memory. We have now forgotten where we were in February 2018,” an MP who attended the meeting quoted the President as saying.

Uhuru recounted the events preceding his handshake with the ODM boss and said that Ruto had nominated at least three members of the BBI task force.

“The morning I was meeting the prime minister to shake hands I met the DP; of the seven members to the task force my people were four and Ruto brought three. At what point was Ruto feeling excluded, it is just fitina (spite)” Uhuru is said to have told the MPs.

The DP has warned against some proposals of the report, such as the appointment of the Judiciary Ombudsman, selection of electoral commissioners, disbandment of the police commission and the role of the Senate.

The DP has also railed against the creation of the positions of prime minister with two deputies and the proposed gender balance formula. He says they do not reflect the spirit of many ‘hustlers’.

He has warned he will lead the ‘NO’ campaigns to reject the report which, he says, seek to create positions for the political elite at the expense of addressing issues concerning ordinary Kenyans whom he has branded ‘hustlers’.

Amani National Congress leader Musalia Mudavadi and Ford Kenya leader Moses Wetang’ula are other politicians who have also expressed reservations about sections of the BBI report.

It is not clear if the duo would join Ruto in pushing for a campaign against the Uhuru-Raila referendum, which analysts opine could shape the 2022 succession line-up.

The President and Raila rolled out an eight-month referendum calendar.

Kenyans are likely to vote in a referendum in June next year, with a team expected to prepare and submit the signatures and a bill to the IEBC between December 2 and 9.

This will be followed by a 30-day period for the IEBC to verify the signatures.

The Wafula Chebukati-led team is expected to submit the bill to the county assemblies between January 11-18.

The assemblies will have 30 days running from January 19 to February 19 to approve or reject the bill. A minimum of 24 counties is required under the law to approve a bill for it to proceed.

Already, the BBI report has dangled carrots to assuage counties to pass the bill, with MCAs set to benefit from a Ward Development Fund they would run just as MPs do for CDF.

Governors will get an increment of county funds from 15 per cent to at least 35 per cent of the national revenue.

In the roadmap unveiled Monday, Parliament will have between February 20 and April 5 to deliberate on the bill before it is taken to the IEBC to prepare a referendum which must be held by June 6, 2021.

The MPs were also taken through a model that will guide the sharing of the additional 70 seats that the BBI report has proposed to the National Assembly to enhance equal representation in the House.

The additional seats will be dished based on the population quota.

Under the quota, counties which are currently under-represented by virtue of high population like Mt Kenya will receive additional MPs.

The proposal set the quota at 132,138 people. During the last boundaries review, the population threshold was set at 133,000.

The quota is arrived at after dividing the total population with the 290 constituencies.

From the formula, Nairobi county will be the biggest beneficiary getting addition 16 seats in the National Assembly followed by Kiambu (6) then Nakuru and Laikipia counties will both have additional five seats each.

According to the formula Tana River, Lamu, Taita Taveta, Garissa, Wajir, Kitui, West Pokot, Samburu, Elgeyo Marakwet, Isiolo, Tharaka Nithi, Nandi, Baringo, Busia, Migori and Kisii counties will miss out from the 70 seats that are meant to address the issues of gender, persons with disabilities and youth.

‘Pray For Me’- Cartoon Comedian Says Diana Marua Is After Her

Your Children Will Burn And You Will Re-build, CS Magoha Says To Parents