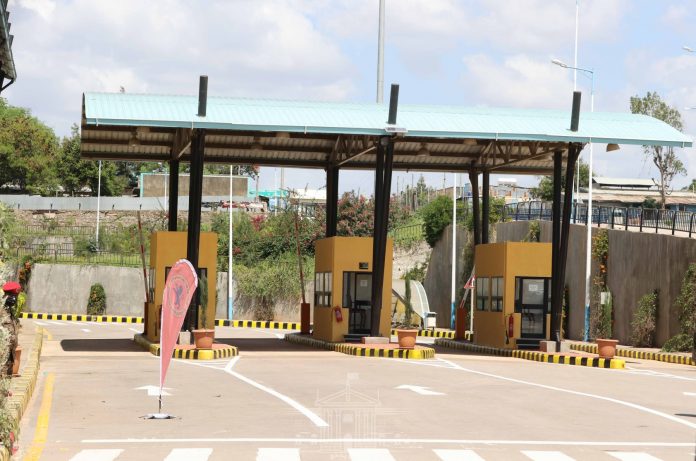 Also inaugurated is the 500-kilometer Hawassa-Hagere Mariam-Moyale Road which is part of the Trans African Highway and a key segment of Mombasa-Nairobi-Addis Ababa transport corridor.

Speaking to residents of Moyale town on the Ethiopian side of the border, President Kenyatta encouraged traders from both countries to utilise the new infrastructure especially the OSBP to boost cross-border trade.

The President said his administration attaches great importance to its partnership with the Ethiopian Government in the roll out of joint infrastructure projects saying such initiatives are aimed at deepening the strong bilateral ties that exist between the two countries.

“Indeed, with the completion of this border post the two countries have demonstrated the political goodwill to address the challenges and impediments facing businesses from both sides.

“In addition to facilitating trade between the two countries, the border post will also enhance mutual interactions among our people and create synergy and unity of purpose,” the President said.

“We want to see Moyale becoming the Dubai of this whole region, people coming here to buy goods and taking them to other countries. That is the beginning of true partnership, true cooperation,” the President said.

Speaking of-the-cuff, at a separate meeting on the Kenyan side of the border, President Kenyatta said non-tariff barriers are the greatest impediment to regional trade.

He said Kenya will continue working closely with her neighbours to eliminate the identified trade barriers so as to increase the flow of business across regional borders.

The President also spoke about cross-border insecurity in the region saying both the Kenyan and Ethiopian authorities will not relent in efforts to ensure lasting peace and tranquility along the common border.

“We must also work together because we cannot establish economic victory if we are consistently having security challenges.

Prime Minister Dr Abiy Ahmed, who spoke during meetings on both sides of the border, said the new Moyale OSBP will help expedite movement of goods and persons across the Kenya-Ethiopia border.

The Prime Minister said Kenya and Ethiopia will continue working together on infrastructure and in maintenance of peace and security along the border region.