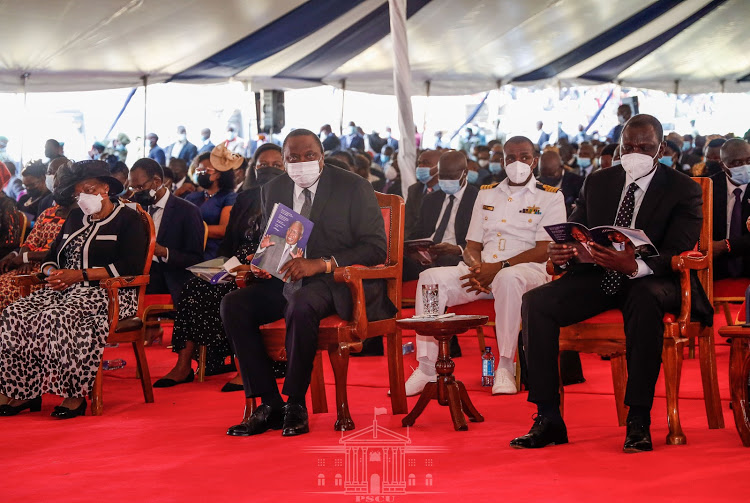 President and his deputy who sat next to each other avoided direct eye contact at Nyachaes funeral.

The President and his deputy have in recent days engaged in a public spat lifting the lid on what is believed to be irretrievably broken ties.

Uhuru and Ruto, who sat next to each other, avoided direct eye contact, leaving no doubt of the simmering tension between them.

The two were meeting publicly for the first time since Jamhuri Day celebrations last year.

Hours before the burial ceremony, also attended by ODM leader Raila Odinga, there had been strategic arrests of key Ruto allies from the Gusii region over an alleged plot to disrupt the funeral.

Kisii Deputy Governor Joash Maangi was nabbed at the Kisii School as he waited to receive Ruto while South Mugirango MP Sylvanus Osoro was lured from the tent that had vetted mourners.

On Sunday afternoon, police arrested and locked up ex-Kisii mayor Samwel Omwando, another influential Ruto ally, and detained him at Kisii police station ahead of the funeral.

The high-profile arrests over plans to disrupt Nyachae’s funeral service highlighted the tension that was brewing and which could have exploded in the stadium.

Hundreds of security agents deployed within and around the stadium barred suspicious mourners, who included some youths allegedly ferried by politicians, from accessing the stadium.

Barely two weeks ago, Osoro engaged Dagorreti North MP Simba Arati in a near fistfight during the burial ceremony of Maangi’s father Mzee Gongera attended by Ruto and Raila.

The burial was characterised by cheers and jeers amid claims some of the crowd had been hired.

Yesterday, only Raila was cheered as he took to the stage to speak.

Osoro immediately linked his arrest to what he termed as attempts to harass and intimidate Ruto’s allies.

“They have not told me why they are arresting me but your guess is good as mine, it is all about muzzling the DP allies,” Osoro told the Star.

As the police tightened security within Kisii, Bonchari politician Denis Omwana also linked to the Tangatanga brigade, was nabbed and locked up at Gesonso police station for questioning.

Yesterday’s arrest of pro-Tangatanga politicians come at a time Ruto’s allies have accused security agents of facilitating rival camps to infiltrate their rallies with hired goons to heckle Ruto.

Mathira MP Rigathi Gachagua told the Star a plan has been hatched by adversaries of the DP to pay youth to heckle him during his countrywide rallies.

“We have information that some politicians and government officials who are feeling threatened by the sustained rising support and popularity the DP has across the country are behind these things. It is very primitive,” he said.

The DP’s hustler nation campaigns encountered resistance in Isiolo, Nyandarua and Kiambaa on Friday and over the weekend as some youth heckled him.

Belgut MP Nelson Koech said “the heckling is staged and within no time, the bloggers and their collaborating news outlets circulate them.”

“In the Isiolo incident, we have established that a politician paid the youth to storm and try to heckle the DP,” Koech told the Star on phone.

The hurried funeral service was, however, punctuated with lethal political jibes that were thrown with utmost precision.

Baringo senator Gideon Moi, a key supporter of the Building Bridges Initiative, nearly set the stage for political fireworks when he said that to be successful one doesn’t need to steal.

In a veiled attack at the DP, Gideon insisted that only sheer hard work, determination and intelligence can propel one to reach the pinnacle of life.

But when he rose to speak – without directly quoting his signature hustler versus dynasty narrative -Ruto fired back at Gideon, saying one does not need to rely on the wealth created by their fathers to succeed in life.

Ruto said Nyachae had the option of waiting to share what his father Mzee Nyandusi had but he chose a different route that saw him create a huge business empire that created millions of jobs.

“Instead of waiting to share what was there, he decided to create more and that is why with a humble posho mill with a small bakery he built a huge business empire that not only created opportunity but also created wealth and jobs,” Ruto said.

He went on: “That is the lesson that mzee in this casket is giving to us as the people of Kenya that, yes, we can wait to share but it is much more important if we roll up our sleeves, tighten our belts, pull up our socks and create.”