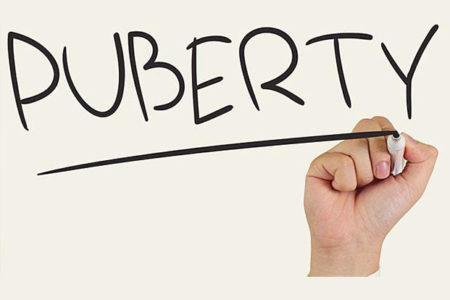 This is a condition in which a child’s body begins to change into that of an adult (puberty) too soon. When puberty begins before the age of 8 in girls and before the age of 9 in boys that is precocious puberty.

Precocious puberty signs and symptoms include development of the following before age 8 in girls and age 9 in boys.

– Enlarged testicles and penis, facial hair and deepening of the voice in boys.

It may be caused by tumors or growth on ovaries, adrenal glands, pituitary gland or brain. Other causes include central nervous system problems, family history of the disease or certain rare genetic syndromes. In most cases no cause can be found for the disorder. There are two types of precocious puberty.

This is a form of precocious puberty that is not started by early release of gonadotropins. Instead it is caused by early secretion of high levels of sex hormones. These include the male androgens and female estrogens.

Normal puberty begins with hypothalamus production of kisspeptin which stimulate the pulsatile release gonatropic hormones from the hypothalamus. This results in an increase in the frequency and magnitude of LH hormones. The diagnosis include;

A gonadotropin releasing hormone against (GnRHa) stimulation test which can tell whether a child’s precocious puberty is gonadotropin dependant or gonadotropin independent.

A bone x-ray to determine if bones are growing at normal rate.

The doctor may also use imaging techniques to rule out tumor or other organ abnormality as a cause. They include;

1. Ultrasound (sonography) to examine the gonads. An ultrasound creates an image on a computer screen of blood vessels and tissues, allowing the doctor monitor organs and blood flow in real time.

2. An MRI( magnetic resonance image) scan of the brain and pituitary gland using an instrument that produces detailed images of organs and bodily structures.

1. Injections- are given as monthly shots into the muscles or daily shots given under the skin.

2. Implants – are tiny tubes a little over an inch long, placed under the skin, usually in the upper arm. They gradually release medicine into the body.

3. Nasal sprays – are given daily.

During the first month of treatment, the signs of puberty might actually become more pronounced. But after that, they will go away. In girls, the breasts will have shrunk after 6- 12 months of treatment.

Side effects are mild they include; menopausal symptoms such as hot flashes, headaches etc.

Other treatment for central precocious puberty include;

Progestin – injections of progestin used to as the standard treatment.

Other treatments – surgery and radiation might be necessary in cases where central precocious puberty has been triggered by a brain tumor. Removing tumor won’t always resolve all the symptoms.

Biden gains the upper hand on Trump in Georgia and Pennsylvania.

A young, industrious girl with a passion on health related issues affecting people around the world. I possess a strong interpersonal skills. I am also proficient in lifestyle and fashion. I'd like my career to revolve around writing, which I fondly call "the art of words" for I believe in power of words to induce change personally and globally.

No Public Health Coverage For COVID-19