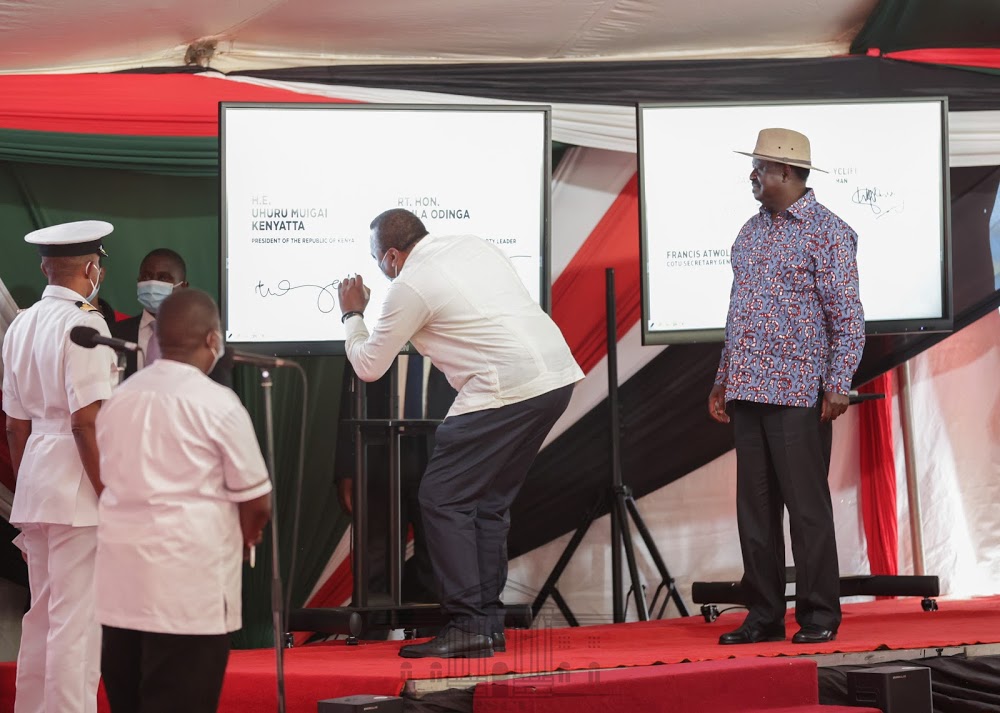 An MP from western Kenya who had declared his intention to run for governor position in the 2022 General Election is said to be considering dropping his ambition and seek re-election as a legislator. A bird close to the MP whispered to Corridors that the legislator is hoping to land a Cabinet position if the BBI proposals being championed by President Uhuru Kenyatta and ODM leader Raila Odinga (pictured) sail through. He is however said to have lost popularity among voters in his constituency and there is a strong possibility that he may lose to a rival who has put up a well-oiled campaign machine. Because of the stiff competition, the legislator is said to be weighing the option of still going for a parliamentary seat but in another constituency, where he is said to have other family interests.

Fresh trouble is brewing in one of the county assemblies after a deal involving MCAs went bad. It is understood that a bigwig in the county who played a key role at a recent political activity is now an isolated man after his colleagues in his camp dumped him for being too mean with their “bonuses”. Two MCAs in the man’s camp have now vowed to expose him. They claim the bigwig made a fortune from the activity, which some interested external forces were keenly pushing for. And with the Christmas less than two weeks away, the MCAs who were keen to line their pockets with the proceeds may have counted their chicks before they hatch.

In yet another similar situation, a governor aspirant from Mt Kenya region has had his 2022 ambitions slip into shaky ground. This is after the man who has previously served as an MP for two terms opted to lead BBI signature collection against the advise of his think tanks. A source in the know says the politician miscalculated his move despite his team of advisers who included two professors and religious leaders telling him the BBI was not popular in his county and he should wait and see how the matter transpires. Just on Saturday, the team of advisers is said to have quit his Whatsapp group leaving the man to his own thoughts. This world can be that savage.

Panic has gripped the office of a Cabinet Secretary. Reason? Corridors understand cash that was nabbed recently is connected to the office. The highly connected CS is said to have pulled strings from West Africa over a deal struck some months ago. The perplexed CS is now on the throes of missing the rest of the cash as the seized money negates the second batch that was expected later before the end of the year. The wheeling and dealing in the high places goes on and on.