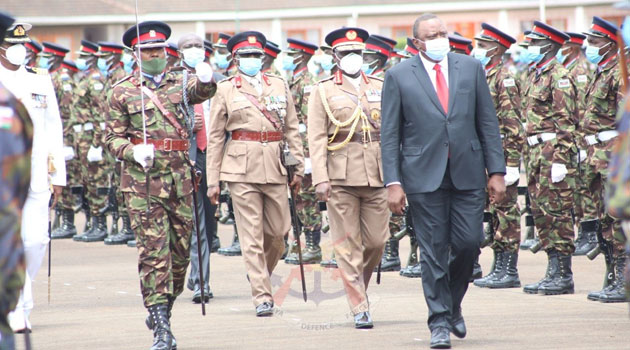 The Kenya Defence Forces (KDF) has responded to threats issued by Somalia President Mohamed Farmaajo, as the row between the neighbouring country and Kenya escalates.

Farmaajo threatened to expel KDF from Somalia and wrote to the African Union Mission to Somalia (Amisom) initiating an anti-Kenya campaign.

Somalia wants Eritrea to take over Kenya’s role in the peacekeeping mission.

“Our presence in Somalia is governed by Amisom agreement,” KDF Spokesperson Zipporah Kioko stated adding that the agreement bars Farmaajo from withdrawing Kenya’s consent to send her soldiers in a peacekeeping mission in the country.

The threats by Somalia to KDF come at a time when Kenya is already discussing a plan to withdraw KDF from Somalia.

KDF’s 10th Battle Group (10GB) was sent to Somalia in November to oversee the withdrawal of Kenyan troops on the peacekeeping mission.

Sources intimated that Defence CS Monica Juma cancelled a press conference that was scheduled for Friday, December 18, despite the press and military being ready for critical announcements.

Farmaajo had sent a memo to Kenya on Friday morning, December 18, at 1 am, expelling Kenyan diplomats from Somalia.

Somalia had issued a seven-day deadline to Kenya to recall her (Kenya) diplomats with the notice due to expire on December 22.

The row between the two countries has seen Somalia report Kenya to the Intergovernmental Authority on Development (IGAD).

She accused Kenya of interfering with her internal affairs.

Kenya’s dalliance with Somaliland, which the Federal Government of Somalia does not recognize, is one of the major issues.

Kenya has recognized Somaliland, which broke away from Somalia.

However, IGAD faces a challenge to resolve the matter as it was reported before Somalia cut ties with Kenya on Tuesday night, December 15.

CHEBUKATI gets down to business with the hope of actualizing referendum.

Algeria To Give Ksh10K Monthly Pay To Unemployed Youths