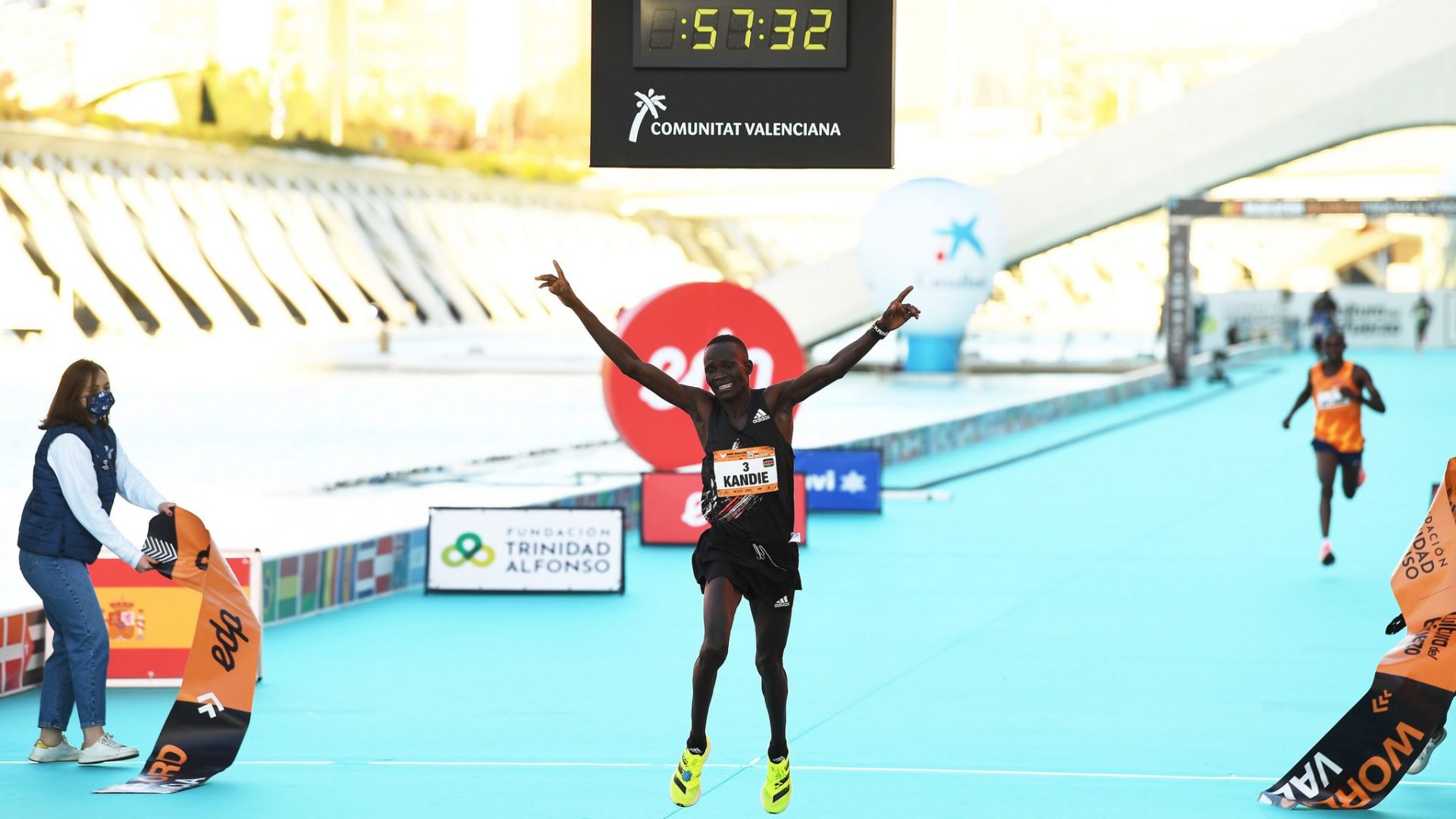 Kenya’s Kibiwott Kandie smashed the men’s half marathon world record in Valencia on Sunday in a time of 57 minutes 32 seconds as compatriots Evans Chebet and Peres Jepchirchir won the men’s and women’s full marathons respectively.

Kandie’s blistering performance was almost half a minute quicker than the previous record of 58min 01sec set by his compatriot Geoffrey Kamworor in September, 2019.

In perfect running conditions the 24-year-old Kandie was chased across the line just five seconds adrift by Ugandan Jacob Kiplimo in a reverse of the world championship result in October.The first four all came home under the former best mark.

Genzebe Dibaba on her debut at the distance won the women’s race in 1hr 05:18.On a memorable day for Kenyan athletics Evans Chebet and Peres Jepchirchir went on to claim both marathons with season best times.

Chebet won the men’s race in 2hrs 03mins 00sec with Jepchirchir victorious in the women’s event in 2hr 17.16.

For the first time, the top 30 in the men’s marathon came in under 2hr 10mins.

Kandie, Kiplimo, Rhonex Kipruto, and Alexander Mutiso all finished the race in under 58 minutes, bettering the existing record of 58:01 set by Geoffrey Kamworor in Copenhagen in September 2019.

The new record is subject to World Athletics’ usual ratification processes. It is the fourth time Kandie has run sub-59 minutes this year, having also done so at the Ras Al Khaimah, Prague, and Gdynia half marathons.

The top five men remained in a tight pack through 19K, all on world record pace.

Around 20K, Kandie and Kiplimo broke away, trading leads until Kandie took the race and the world record.

The top four men all ran under the previous world best, with third placed Rhonex Kiptruto finishing in 57:49 and fourth placed Alexander Mutiso in 57:59.

More impressive was that it was Kipruto’s half marathon making it the fastest debut in history.

It was a swift and sweet revenge by the 24-year-old Kandie against Kiplimo, who beat him at the World Half Marathon Championships in Gdynia, Poland, on October 17 this year.

In the women’s race, Genzebe Dibaba won the event in her debut over the distance. She ran a 1:05:18 to become the 12th-fastest woman to ever cover 21.1K.

After running most of the race solo, with only her pacers accompanying her, she comfortably took the win, missing the women’s world record in a mixed race (1:04.31) currently held by Ababel Yeshaneh who set it in RAK earlier this year.

Meanwhile, Chebet beat compatriot Lawrence Cherono in a thrilling sprint finish to win the men’s race in a new course record of 2:03:00.

In the women’s race, Peres Jepchirchir clocked 2:17:16 to also smash the Valencia Marathon course record ahead of Joyciline Jepkosgei in 2:18.40 with Helalia Johannes taking third place in 2:19.52.

The men’s race was intriguing as Chebet’s 2:03:00 was highly calculated, sitting behind the second-place finisher, Lawrence Cherono,for the final 2K, only passing him with 300m to go.