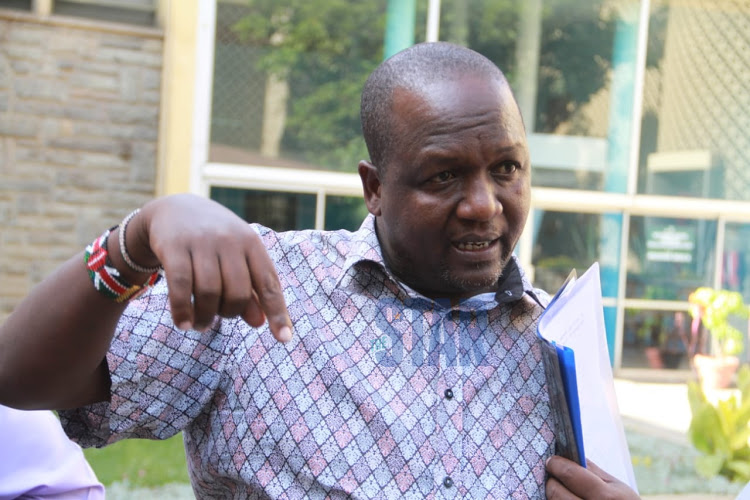 Tiaty Member of Parliament, William Kamket was grilled for five hours on Saturday in connection with the violence in Kapedo area of Baringo County that has left more than 20 people dead in less than two weeks.

Among the dead are three police officers who include a senior cop attached to the General Service Unit.

Kamket discreetly presented himself at the Rift Valley Regional Directorate of Criminals Investigations headquarters where he was grilled for close to five hours.

He later left the premises through a back gate leaving journalists who had been camping at the main gate waiting.

His lawyer, Gordon Ogola who accompanied him during the questioning told journalists that his client did not appear before the DCI, a narrative that was dismissed by Rift Valley Regional Commissioner, George Natembeya.

Natembeya said Kamket arrived at the DCI regional offices earlier that the scheduled time which was 9:00 am adding that the politician could not risk ignoring a summon requiring him to appear for grilling.

“I would not understand the reason why his lawyer chose to mislead journalists but the MP presented himself,” said the administrator.

Kamket was arrested last week hours after a video of him threatening the government that the people of Pokot would meet the security forces with more force than what it exacts went viral.

The former journalist turned politician had joined other leaders in the region to in urging the State to de-escalate operation in the volatile region when he made the statement on January 20.

He was arrested in Nairobi and released with orders to present himself to the DCI Nakuru on January 29 but the appointment was postponed to yesterday.

Natembeya added that Kamket will appear before the DCI in Nakuru again next week for further questioning.

Hours after the DCI date, National Cohesion and Integration Commission also summoned Kamket to appear before it on February 8 over his hateful speech that was likely to affect peaceful coexistence of the people in Baringo.