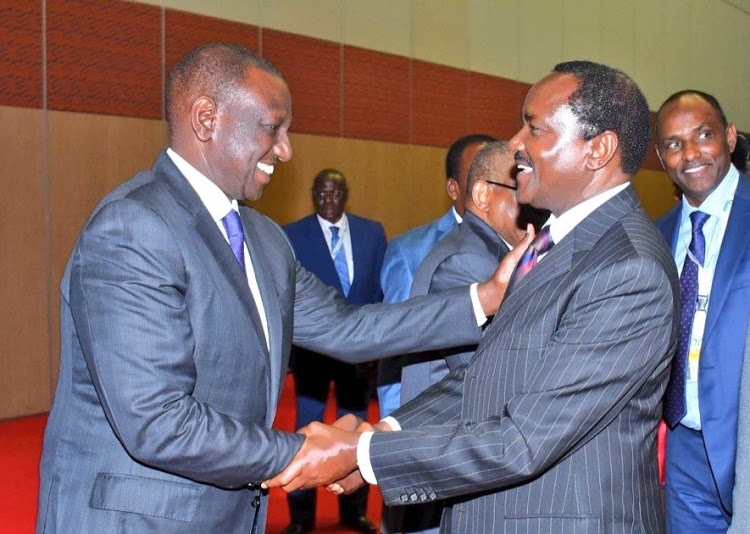 Wiper party leader, Kalonzo Musyoka has told Deputy President William Ruto to prepare for a bruising political battle for the top seat in the 2022 General Election.

Speaking yesterday in Masinga sub-County, during the burial of Machakos Senator Boniface Kabaka, Kalonzo told the DP that he will not accept to be demeaned politically in the elections.

His remarks appeared to have been triggered by statements from politicians allied to the DP, including Elgeyo Marakwet Senator Kipchumba Murkomen, who urged him to consider a forming a coalition with Dr Ruto.

Murkomen disparaged Kalonzo’s cooperation with Jubilee government, terming it a ticking time bomb of political deceit. “Do not be lied to. We know Jubilee party better than you do. They will short-change you,” Murkomen told Kalonzo.

The leaders had urged former Nairobi Governor Mike Sonko to lead the Kamba community into the DP’s camp, claiming that Kalonzo had failed to move the people to power.

But Kalonzo shrugged off the calls, promising to give Ruto a run for his money in 2022.

“Nobody is going to demean us. If I was to tell you, William (Ruto), prepare for a straight fight nationally. I am very well known in the Rift Valley and everywhere else in the country and so there is no need for much talking. Prepare properly. It will be Kalonzo versus Ruto,” said the Wiper leader.

But when he rose to address the mourners, Ruto steered clear of the matter and called for sobriety in the discussion of public affairs and the future political leadership of the country.

The DP urged leaders allied to Kalonzo to stop packaging him as an ethnic kingpin but rather as a national leader. “Kalonzo is a national leader. Let us not reduce him to a tribal kingpin as some leaders have been doing. Leaders of this country must rise above tribal mentality and focus on building a united and cohesive nation,” Ruto said.

The DP said it was critical for the political elite to learn to walk away from the balkanisation of the country along ethnic and tribal lines.

The late Machakos Senator who was buried at his home in Mikuyu village in Ekalakala location was eulogised as an intelligent and selfless leader who prioritised the interests of the people.

Machakos Governor and Maendeleo Chap Chap leader Alfred Mutua lauded Kabaka’s contribution in development projects in the county. “We will remember Kabaka as a courageous and devoted leader who fearlessly defended and championed the interests of his community,” Mutua said.

Sonko, who spoke for the first time since his ouster last week, made unsubstantiated claims regarding Kabaka’s death, calling for thorough investigations. He claimed that the senator predicted his death and had problems with ‘people within the system.’

Senators Moses Wetangula, Millicent Omanga and Enoch Wambua eulogised Kabaka, as an astute debater and man who spoke his mind without fear.

Kabaka was 54 years old and is survived by his wives Jennifer and Vascoline.

Never Struggle With A Driver Of A Fast Moving Matatu To Take Control Of It, A Woman Died Out Of It.