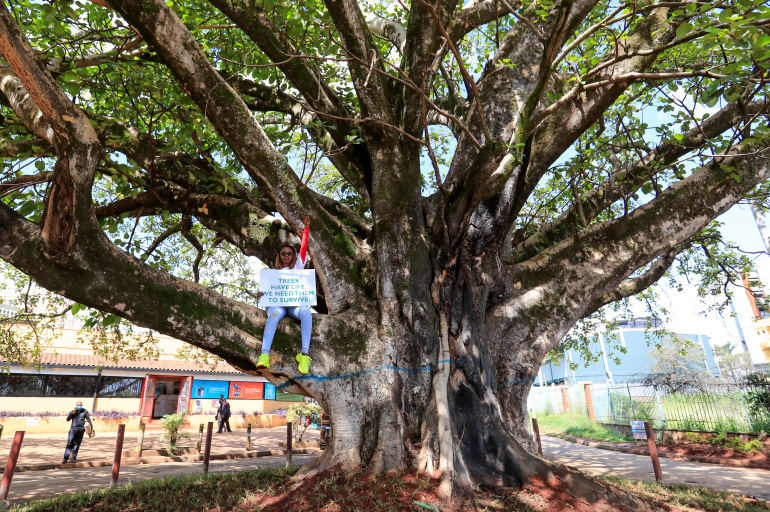 Environmental activists in Kenya have hailed an official decision to save an iconic, century-old fig tree from being taken down to make way for a highway in the capital, Nairobi.

A decree issued by President Uhuru Kenyatta described the famed tree – the height of a four-storey building – as a “beacon of Kenya’s cultural and ecological heritage”.

Kenya’s roads agency had said in October that it planned to uproot and transplant the fig tree in order to erect a pillar to support the Chinese-funded expressway built to reduce traffic jams.

In response, environmentalists launched a campaign to protect the tree, which stands on Waiyaki Way in the west of the city, where engineers are building the expressway above the existing road on pillars.

“We did it!” Elizabeth Wathuti, a prominent environmental activist and head of campaigns at the Wangari Maathai Foundation, wrote on Twitter on Wednesday after the issuing of the declaration.

“We’ll keep doing it for all green spaces!”

Mohammed Badi, director general of Nairobi Metropolitan Services (NMS), had earlier told a news conference next to the tree “It is now a presidential declaration that this tree will be conserved”.

The tree will be adopted by the NMS on behalf of the city’s residents and both the China Road and Bridge Corporation and the Kenya National Highways Authority have agreed to reroute the road.

The tree will now stand as a sign of the city’s aspirations, added Wathuti.

“This particular fig tree is just a symbol of the bigger picture of what we are asking for,” she said. “We want a green and clean city, and clean Kenya.”

What will happen to KDF soldiers in Somalia?

Kuria To Sue Over Electric Mat That Burnt His Feet