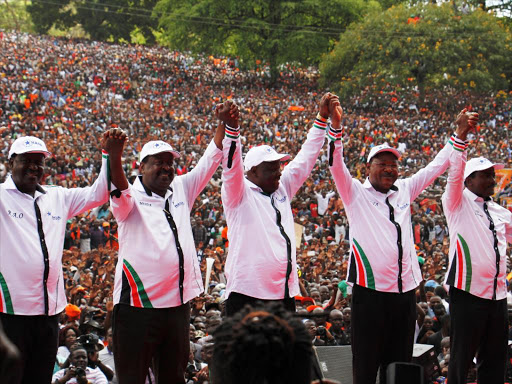 It is a headache for the crowded field of Opposition bigwigs gunning for the presidency.

On Friday, the Star exclusively reported that some people in President Uhuru Kenyatta’s inner-circle are pushing for Mudavadi to be his successor.

However, ODM leaders said a joint candidate ought to be strongest, and only their boss Raila is Ruto’s match.

The feeling among Raila’s allies is that he is a go-getter with networks across the country who only needs a little push to become president.

Beginning Friday, for instance, Raila is on a three-day blitz in Turkana to retain the grip of a region that has overwhelmingly voted for him in the last three elections

“The ODM party will go all the way to the presidential ballot next year; we have kicked off the process that would culminate in the unveiling of our presidential candidate,” ODM national Treasurer Timothy Bosire said on Friday.

Bosire, the ex-Kitutu Masaba MP said ODM being one of the country’s biggest political parties will not fail to field a presidential candidate.

ODM secretary-general Edwin Sifuna has promised the party will not support any ‘outsider’, saying those seeking Raila’s support should join them.

“There is absolutely no chance that ODM will support another party’s candidate. We have participated in elections before and won as ODM. People should not create the notion that ODM must be in a coalition to win an election,” Sifuna declared.

Kalonzo another key Opposition heavyweight has declared he will throw his hat in the ring in next year’s battle. Kalonzo insists he is tired of playing second fiddle.

Both Mudavadi and Kalonzo backed Raila’s 2017 Presidential bid under the Nasa coalition in which they lost to President Uhuru and Ruto in a contested poll with the Wiper boss as his running mate.

In the 2007 poll, Mudavadi supported Raila after an epic battle for the ODM presidential ticket, but the duo lost to retired President Mwai Kibaki in a disputed victory.

Ruto, who fell out of favour in President Uhuru’s succession matrix, has heightened his vote hunt across the country making him the frontrunner in the battle for the country’s top job.

Politicians argue that a failure by the main big boys to cobble a single coalition to take on the DP next year could hand Ruto an easy ride to State House despite his isolation.

Ruto is no pushover in the 2022 elections. He has the money and has been campaigning day and night. While Raila is the most worthy opponent, a coalition like Nasa would be unstoppable

“It is either they unite or suffer a humiliating defeat in the hands of Ruto,” declared former Cabinet minister Franklin Bett.

The Nyayo era State House Comptroller who served as chairman of the ODM’s National Elections Board insisted that to counter Ruto’s hustler nation campaigns, the big boys must unite.

“Raila, Musalia and Kalonzo might be forced to develop another working chemistry that will include Gideon Moi to have a formidable alliance if they would defeat Ruto,” Bett said.

Mudavadi, Raila and Kalonzo crafted the wobbly Nasa coalition that nearly vanquished Uhuru’s bid for a second term in 2022.

However, the coalition whose leaders say exists only on paper, has been teetering on the edge for a potential split with the trio appearing to be focused on a different political path.

Woman forgives ex-husband who stabbed her

Ruto will still be the Deputy President unless impeached by parliament; Tuju says.