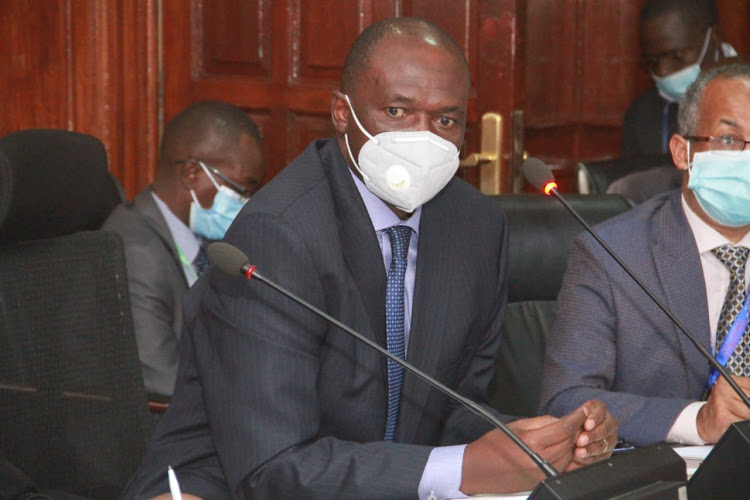 “I neither gave directives nor was I consulted on the quantities that were procured. I am not in the know on whether UHC funds were used in the purchases.”

Amoth said many people went to Afya House asking for business opportunities, a practice he said is commonplace to date.

“They came as individuals, including innovators. We have letters of intent from some bidders. We referred all of them to Kemsa. What happened there was beyond my control,” he said.

He said Kemsa did not ask for information on projected virus cases to define the quantities that would have been required.

Amoth was also cross-examined on why he failed to advise Kemsa on the items that were required for the emergency response.

He said they wanted Kemsa to use the specifications in place owing to the urgency at the time.

Nassir asked about the number of PPE the country would require to fight the pandemic to the end.

Amoth said the projections in April put figures at 5,000 infected people and most cases were asymptomatic.

“At that time, though, we had not developed the home-based care concept hence admitted all patients,” he said.

But MPs accused the director general of passing the buck to Kemsa, yet he was aware of the general specifications and design but failed to advise the concerned.

Ruaraka MP TJ Kajwang lamented that Kemsa had made huge procurements until very late, yet the same was not driven by any need.

This was despite the task force on virus response projecting to purchase 25,000 PPE in the long run.

Amoth admitted that the available stocks – valued at about Sh6.2 billion – are way above the numbers reported in the country today.

He said the hope of disposing of the items lies in the long wait for the country to get a vaccine against Covid-19.

“A lot of work is going on in terms of getting a vaccine. It will go through a process before we get them, thus the products at Kemsa warehouses can still be used owing to the long wait for a vaccine.”

PIC also sought answers on what transpired with donations from the Jack Ma Foundation.

Amoth said he only did a ceremonial receipt of the goods and was not aware of where they were taken afterwards.

“I received the donations with Dr Ombacho. The consignment was taken by airports cargo handling authorities. I don’t know what happened to it later.”

“I was the face of the government at the ceremonial receipt. We couldn’t open the package to verify the content.”

He said there were technical officers from the ministry who were working with Kemsa to record the donations.

Amoth said officials from other countries – Ethiopian, Somali, and Tanzania – were present as they also had their share.

Does a degree/diploma really matter?

I’m A Member Of LGBTQ’ – Chimano Finally Comes Out