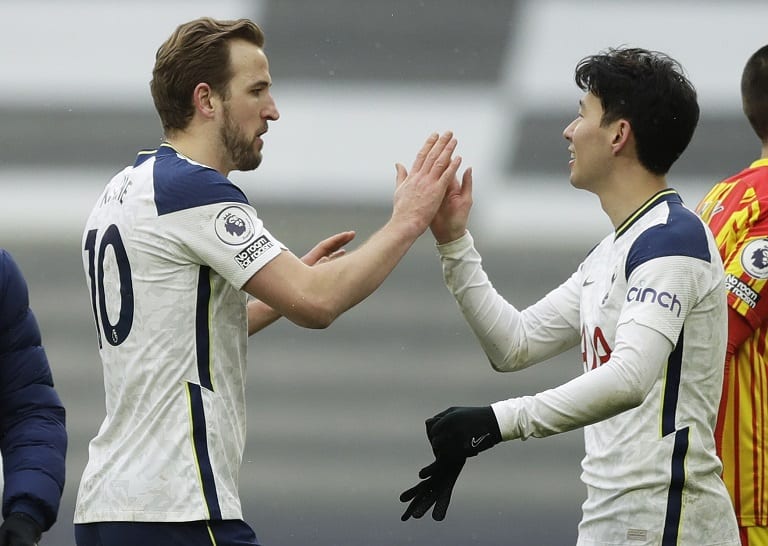 Harry Kane made a surprisingly speedy return from injury to solve Tottenham Hotspur’s scoring struggles as he opened the scoring in a 2-0 victory that piled more misery on West Bromwich Albion.

Spurs boss Jose Mourinho had suggested the England captain’s ankle issues would sideline him until next week but Kane came back ahead of schedule to help end Tottenham’s three-game losing streak in the Premier League.

Tottenham had failed to score in both matches Kane had missed but he took Pierre-Emile Hojbjerg’s through ball into his stride to slot home and break stubborn Albion’s rearguard resistance early in the second half.

It was Kane’s 13th Premier League goal of the season, taking him ahead of strike partner Son Heung-min for all of four minutes until the South Korea striker sealed Spurs’ victory with an emphatic finish from Lucas Moura’s pass.

Victory moved Spurs up two places to seventh, four points off the Champions League places, although that position and gap could change later on Sunday with Chelsea and Liverpool in action.

Recent loan signing Mbaye Diagne was unlucky not to register his first Baggies goal on three occasions. The Senegal striker’s first-half header forced a fine save from Spurs skipper Hugo Lloris and he also saw two second-half finishes ruled out for offside.

Leading into the game, both teams appeared to be in varying degrees of disarray. Two months ago, Spurs topped the Premier League but had dropped to ninth, seven points off the top four, while a bedraggled West Brom had fallen increasingly adrift from safety.

From minute one, Kane’s return clearly boosted the hosts who, as they have historically done, boasted a far greater cutting edge with him back in the fold than they had during the two games he missed.

Since the 27-year-old became a Spurs regular in the 2014-15 season, Tottenham have won 56% of Premier League games when he has been available but just 41% without him. Their average goals-per-game figure drops from 1.9 to 1.2 with him out of the side.

Those discrepancies have been magnified even further during Mourinho’s reign – Spurs’ win ratio in the league has dropped from 51.4% with him in the team to 30% without, losing five of the 10 matches he has missed, while both points and goals per game slip from 1.8 to 1.1.

While the limitations of their opposition are a factor that should be taken into account, Spurs looked a different side with their talismanic forward back in the fold, enjoying more touches in the opposition box in the first half (15) than they did in the entirety of Thursday’s dour 1-0 defeat by Chelsea.

Kane could have had a first-half hat-trick but his finishing was atypically wasteful, lashing one chance on to the stanchion behind the goal and dragging another wide before finally forcing a near-post save from Sam Johnstone.

He made amends by holding his run perfectly to avoid being flagged offside for his coolly taken opener and, having set up Son for an earlier chance that Johnstone saved well with his legs, also played a part in the swift break that ended with the South Korean drilling home the second.

Kane’s goal was his 20th in all competitions for Spurs this campaign – a milestone he has passed in his past seven seasons.

He continues to underline his importance to a Tottenham team who really do appear lost without him.

Still no joy against Mourinho for Allardyce

West Brom boss Sam Allardyce relegated in-form playmaker Matheus Pereira to the bench in a bid to shore up Albion and cure the defensive ailments that have plagued their campaign, having conceded a mammoth 54 goals in 22 games.

It worked to an extent as Albion frustrated their hosts for long spells but they were still reliant on Kane’s first-half wastefulness, as well as a smart save from Johnstone to thwart Serge Aurier’s far-post header.

Had they displayed this sort of defensive fortitude in previous games, West Brom might not be in the desperate position in which they find themselves.

Three apparent opportunities fell to on-loan Galatasaray forward Diagne. However, the two that he stuck away – a close-range header and a prodded finish – were both scored from offside positions, whereas when he did stay the right side of the Tottenham defensive line he headed too close to Lloris, who still did well to save down low.

Ultimately, West Brom were undone by Spurs’ quality in the opening 15 minutes of the second half and it was another defeat for Allardyce against Mourinho, who he has never beaten in 13 attempts – three draws and 10 losses.

Allardyce will be heartened by the impact of several transfer-window signings – Diagne’s liveliness suggested he will score goals at this level, Robert Snodgrass delivered good crosses and Ainsley Maitland-Niles made an assured, if understated, debut.

But after just one win in 13 games, and with the teams above the relegation zone continuing to regularly collect points, the Baggies will need a miraculous turnaround to avoid an immediate return to the Championship.

BBI is the only way to strengthen national security and safety

Ruthless Manchester thrash AS Roma in the Semi Finals.