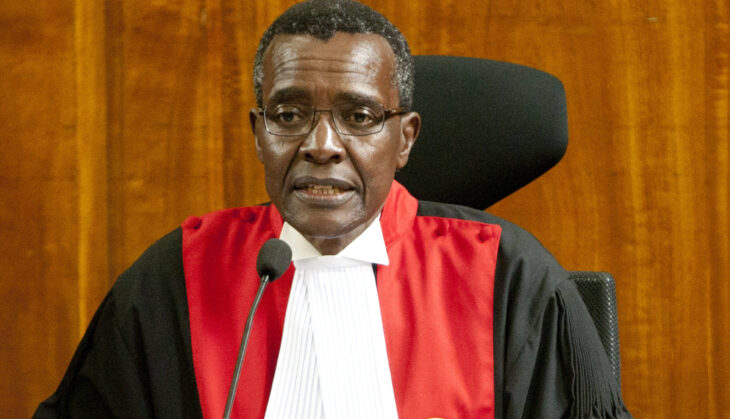 Former Chief Justice David Maraga has dismissed a tweet that quoted him endorsing the election of William Ruto as president.

The tweet claimed Maraga termed Ruto’s declaration as the winner in the August 9 presidential race valid, further calling for his swearing-in on August 30.

But in a tweet through his official account on Tuesday, the former President of the Supreme Court dismissed the quote as fake and urged Kenyans to ignore it.

“This tweet circulating on social media purporting to be authored by me is FAKE, please ignore,” he said.

Ruto’s declaration as the president-elect has drawn opposition from several parties, among them his main rival, former Prime Minister Raila Odinga who has moved to the Supreme Court to challenge the win, terming it “null and void”.

Odinga and his running mate Martha Karua on Monday filed a petition accusing Mr. Chebukati of having violated electoral laws and having a willful intent to subvert the sovereign will of the people of Kenya and overthrow the constitutional order.

The August 9 General Election, according to them, was conducted in a manner that was in disregard of the constitution, rule of law and national values, principles of good governance, and the lawful authority of the Court.

This was to “premeditated unlawful and criminal subversion of the integrity and constitutionality of the electoral process in order to assist and secure a fraudulent result,” they said.

The duo further accused IEBC Chairman Wafula Chebukati of having a willful intent to subvert the sovereign will of the people of Kenya and overthrow the constitutional order.

In a separate petition, Busia Senator Okiya Omtatah also dismissed the presidential results, stating that no candidate achieved the 50% plus one threshold stipulated in the constitution.

Omtatah said the tally does not add up and that the final results were not based on the absolute total number of votes cast and did not factor in some 140, 028 votes, which he said would alter the outcome of the final results and particularly the constitutional 50%+1 threshold.

The Busia Senator’s arithmetic in the petition placed all candidates below the 50 percent mark with William Ruto scoring 49.9 percent and Raila Odinga 48.3 percent.

All eyes are now on the Supreme Court which is set to determine all the eight petitions filed challenging Ruto’s win.

Constitutionally, the court is supposed to issue its ruling 14 days from the day a petition is filed.