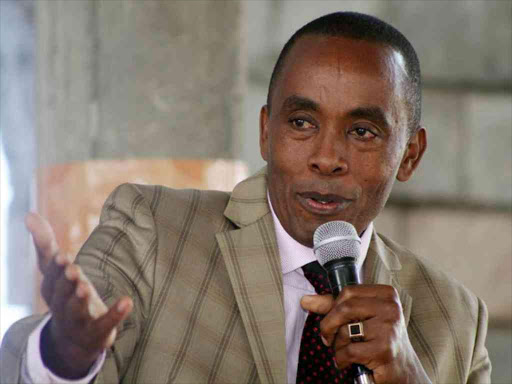 In February 2019, a car bazaar near Nyayo Stadium belonging to Kiambu Senator Kimani Wamatangi was demolished for standing on Kenya Railways land.

Wamatangi said he had a valid lease and had occupied the property for 20 years. That means he started his business around 1999.

The senator sold cars between 1997 and 2002 but during this time, he was not known as Wamatangi but Paul Kimani Njoroge. He acquired the name Wamatangi (The tanks guy) around 2003 from donating water tanks in Kiambu.

Wamatangi happens to the President’s senator, and was certainly rewarded for his loyalty and defence of Uhuru Kenyatta against Deputy President William Ruto allies in his various platforms.

According to Standing Order No 2 , Wamatangi is expected to ensure Jubilee senators attend to House business, particularly when there is contentious business to be transacted, with a view to ensuring that each party’s policy stance/agenda is passed; select senators from their respective parties to serve in various committees and enforce party discipline among senators as well as disciplining errant members.

The third role will prove difficult, considering the competing interests and infighting in the Jubilee Party.

Wamatangi, however, said he will use the experience he has gained since he was first elected to the Senate in 2013. The senator said he will work by building consensus, consult, finding agreement all the time and ensuring that “we walk the journey together” to prosecute business in the House.

He admitted the same in his acceptance speech on Wednesday saying, “I want to confirm to members of this House that I am under no illusion that the job I have been asked to do for the Senate is an easy one”.

Wamatangi, however, said he will use the experience he has gained since he was first elected to the Senate in 2013. The senator said he will work by building consensus, consult, finding agreement all the time and ensuring that “we walk the journey together” to prosecute business in the House.

Over the years he has been in business, Wamatangi was/is associated with Lub Plus Trading, Apex Security, Kings Realtors and Construction, Total Assurance, Auto Bass Limited, King Group Limited and Prime Motors.

His colleague in the Senate Aaron Cheruiyot and MP Otiende Amollo describe him as an honest person.

But he has had his controversies.

In 2015, a businessman filed a case accusing Wamatangi of refusing to pay a debt of Sh1.4 million and sought to have him declared bankrupt and his property attached.

In the case filed at the High Court in Nairobi, Caleb Kapten said Wamatangi failed to pay the amount arising from a 2014 judgment.

Kapten had contracted Prime Motors to sell his vehicle for at least Sh1.8 million. However, the company later claimed it sold the vehicle for Sh1.2 million, causing Kapten to sue.

Judge Mary Kasango concluded the matter on April 30, 2020, setting aside and annulling the bankruptcy order issued on May 9, 2019. This was after finding Wamatangi had fully cleared the debt.

In another case, a woman alleging to have been his former domestic worker sued the senator for neglecting their daughter.

Winfred Wangui said she gave birth to the daughter on April 23, 2007.

Wamatangi denied knowing the complainant, having sired a child with her and having had intercourse with her.

“I am not the biological father to the minor herein, I have never seen the minor and I do not know of her existence,” the senator said in a sworn affidavit.

Carol Kodiyo; Of Childhood and Growing Up

New Twist As A Former Nairobi Governor Was ‘Chewing’ her, Kiambu Lady Who Was Murdered By Her Rich Husband.