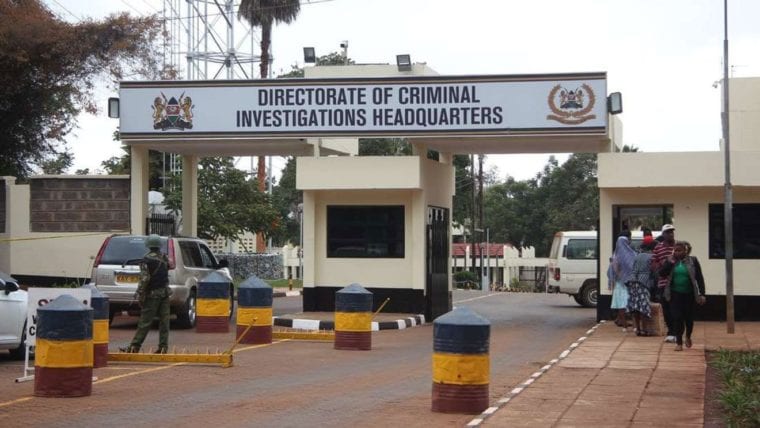 The Directorate of Criminal Investigations (DCI) is warning students against taking part in any criminal activity in institutions following incidents of unrest and destruction across secondary schools in the last two days.

Barely six weeks to this year’s KCSE examinations, a worrying trend of school fires and property destruction resulting in massive losses in terms of infrastructure is threatening the success of an already delayed academic year.

Bungoma County is on the spot with yet another incident at St. Luke Boys High School on Monday morning where students protested and broke several windows in classes and hostels over an incident where corporal punishment was meted on one of them by a prefect.

Police intervened to calm the situation and several students were arrested. The school has been closed indefinitely with education officials warning that it’s the parents who will bear the cost.

In Baringo County, students of Kituro High School and Timboroa Boys High School are counting losses after a fire razed their dormitories on Sunday evening.

The fire started at around 9pm when students were in class for evening preps and destroyed property of unknown value including beddings, uniforms and boxes.

This left nearly 100 students without essentials forcing them to share accommodation with students in other dormitories.

In Timboroa Boys High School in Eldama Ravine, a school dormitory was reduced to ashes in an unexplained fire.

Ten students at Kimulot Boys in Konoin, Bomet County were arrested on Monday morning after a dormitory was set ablaze.

Education Cabinet Secretary Prof. George Magoha who spoke in Kajiado said continued destruction of property will not be tolerated anymore.

“In terms of fires and the indiscipline in schools, let us stop treating children like eggs, you’re supposed to allow your child to be prepared to go through life. So as teachers you must be very vigilant, and any person who feels that he/she is a child and is going to assault a teacher, we shall come to you like a tonne of bricks. And I would want all teachers to feel very free to continue to instill discipline,” said the CS.

The DCI is now warning learners from primary, secondary and tertiary institutions about the risks that come with such behaviour.

The warning reads in part;

“This is to warn every student that the DCI is archiving and consolidating charges that may be preferred to each and every student involved in any crime. Let each student be informed that it will automatically be reflected on the police clearance certificate commonly referred to as Certificate of Good Conduct.”

The crimes listed include armed and unpeaceful demos, arson, drugs, cyberbullying, assault of any degree, drunkness or any reported crime of any kind.

All you need to know about hemophilia.

Shock As 16 American Missionaries Are Kidnapped By Armed Gang