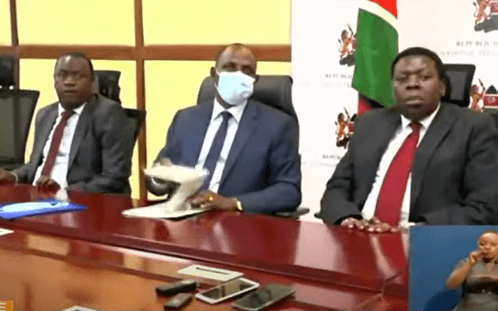 Treasury Cabinet Secretary Ukur Yatani and his Devolution counterpart Eugene Wamalwa have dismissed as baseless claims by Deputy President William Ruto that the government would be in no financial position to implement the 35 per cent revenue allocation as proposed by the Building Bridges Initiative (BBI) Bill.

The CSs defended the 35 per cent BBI proposal saying it is based on the country’s economic growth projections.

In a meeting with the new Council of Governors Chair Martin Wambora held at the Treasury building on Wednesday, CSs Yattani and Wamalwa dismissed remarks by the DP that the government had failed to even deliver 15 per cent allocation to counties.

“The amount of 30 or 35 per cent is doable…From where I sit, as the person at the center of the decision-making, it is not a mere statement; it is well thought out, planned and we have the resources to do it,” reiterated CS Yatani.

President Uhuru Kenyatta and ODM leader Raila Odinga have been dangling the devolution carrot to the electorate to endorse the BBI saying the proposals include a 35 per cent increment of revenue share to the devolved units.

But DP Ruto last week dismissed the proposal saying the government had failed to deliver the 15 per cent hence the 35 per cent proposed increment was unrealistic and dishonest.

CSs Wamalwa has since however termed Ruto’s sentiments as mere politics.

“For the naysayers and anyone who wants to oppose BBI, please look for another reason, and not the issue of devolution being strengthened,” said Wamalwa.

Under the current 15 per cent allocation arrangement, Treasury has already disbursed funds to counties for the months of October and November and now remains with the months of December and January.

New CoG Chair Martin Wambora has welcomed the disbursement to the counties as timely.

U.S. ‘deeply disturbed’ by reports of systematic rape of Muslims in China camps