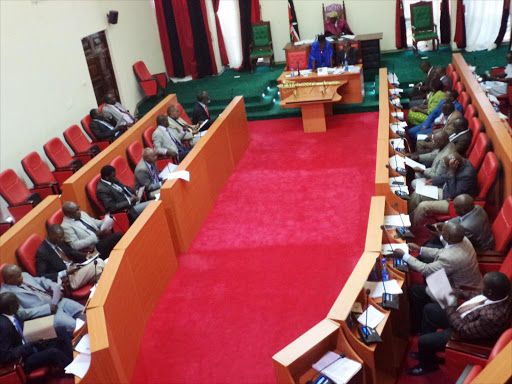 Baringo County Assembly became the first to reject the Constitution of Kenya (Amendment) Bill after a chaotic session.

Just before the Speaker declared the results where 30 MCAs rejected the Bill in comparison to 11 who voted yes, teargas was thrown into the chamber.

The Speaker braved the chaos to announce the results and adjourned the sitting.

Earlier, Riot police were called on Thursday to quell a disturbance in the Baringo assembly as members fiercely disagreed over the tabled BBI Bill.

Trouble started after Kabarnet MCA Ernest Kibet called for order and snatched the microphone from the mover of the motion, Mogotio MCA Charles Kosgei.

Kosgei is a Jubilee supporter and chairman of the justice and legal affairs committee. Kibet is an independent member.

“No, will not allow you to table this motion,” Kibet said while pointing the mic at Kosgei and threatening him with it.

The BBI Bill was tabled a day after the members returned from Jubilee headquarters where they met party secretary-general Raphael Tuju in Nairobi on Wednesday.

The bill sparked a hot division between the supporters of Deputy President William Ruto and the Kanu chairman Gideon Moi, both from Rift Valley and seeking the presidency in 2022. Gideon is the Baringo senator.

Riot police officers were deployed to calm down the situation before members continued to discuss the BBI motion.

Kanu members called for adjournment but the speaker resisted.

Jubilee on Its Deathbed