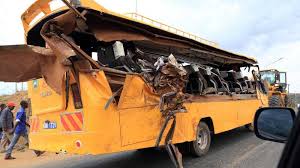 A bus full of pupils overturns on a busy highway

A bus full of pupils has overturned at the Mwirine area of the Meru-Kaaga by-pass.

According to sources, the bus was ferrying at least 26 pupils of MCK Kaaga Academy.

The students who sustained minor injuries were taken to the Meru Level 5 Hospital where they are undergoing treatment.

A doctor in charge of the facility, Joseph Wahome, reported that all the students were in stable condition.

He stated that out of the 26, 19 had sustained minor injuries, while the seven had been taken for X-ray.

The accident came a day after a Public Service Vehicle (PSV) ferrying learners was involved in an accident, killing one pupil from Mwatate junior school and leaving others injured in Taita Taveta County.

The vehicle is said to have been ferrying the students to school from Mombasa County.

14 other students who were also in the vehicle sustained minor injuries and were rushed to a nearby hospital.

The accidents took place just days after schools reopened on January 4, 2020, following their closure in March 2019, in a bid to curb the spread of covid-19.

RUTO meets ‘Wheelbarrow’ Party team ahead of the by-elections

Anne Kananu is set to be Nairobi’s governor